So you think you’re ready to write the script that’s been swimming in your head for months (maybe years)? Here are 10 things you need to know before you put pen to paper—or fingers to keyboard.

1. Know your subject. Don’t guess. Take the necessary time to fully research anything that isn’t first-hand information to you.

2. Don’t rely on the actor to save bad writing. If you write it like you mean it, the actor can deliver like he means it.

3. If the characters are people you know well, you know what they think, how they feel and how they speak. Use it. If you don’t know the people who populate your piece you have to get to know them. You have to write them as if you know their thoughts, their feelings, their manner of speaking.

4. Remember: If it’s not on the page, someone will assume to know what you meant and there goes your story with an interpretation that was not intended.

5. If you are a first-time film writer, be prepared to take below-the-belt shots from everyone over and over again. Day in and day out you will be rejected until, lo and behold! one day someone will love it and option it. [Remember: Mario Puzo shopped around THE GODFATHER for years and years.]

6. Let’s assume your screenplay will be on the big screen soon. The director, the lead actors are all neatly lined up. Location scouting begins and whoops! the unforeseen happens—the president and the vice president of the production company have a huge fight, the company breaks up. The vice president who originally championed your script into the company leaves, your script is abandoned. Over. Be prepared for things like that.

7. You have to take your time to cry and suffer and accept reality. How much time do you need before you can pick yourself up and start all over again? Time always rushes faster than you think.

8. One script is out in the industry, being read, and if your luck holds it might be optioned again. You spend the next year of your life researching and developing another script on speculation. The crux of your storyline intertwines with locations and the economy of a foreign country. The production is tied to that country and its economical landscape. Whoops! A major coup occurs and the country’s economy is drastically changed. Your story is dead. Be prepared for things like that.

9. Time rushes, you cry, suffer and pick yourself up and start all over again. Why? Because you are a writer and writing to you is like breathing.

10. Get rid of everyone who does not believe in you. 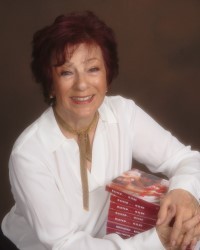 Katherine MK Mitchell is the author of Shelby’s Way … Maybe, the third installment of her Maybe series. Striving for the elusive major success, she worked in film and television for several years in Los Angeles before relocating to Florida. Three of her screenplays have been optioned by production companies, and her treatment for a serialized television soap was considered for production by Columbia TV.