Gary Adcock and Tom Fletcher released an excellent camera comparison chart that has a great deal of useful information about a number of cameras that we see and use every day. This chart is a useful tool for experienced pros and newcomers as a way to navigate the many nuances of shooting and recording formats available to work with. 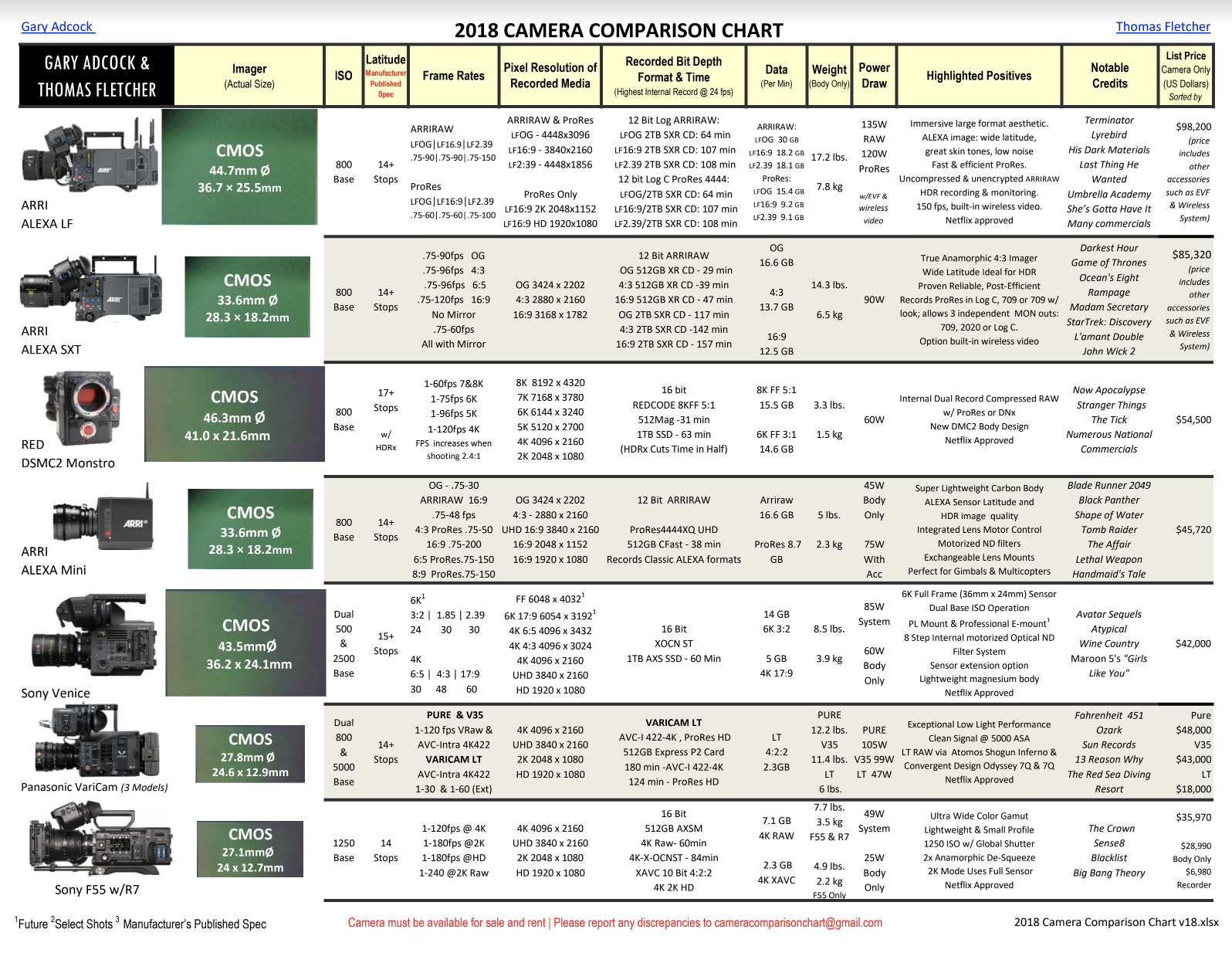 After taking some time to review the chart, it became apparent that there had been a lot of work put into making the chart a reality. I had the opportunity to catch up with Gary Adcock and have a great conversation about some of the history and thinking that went into the chart.

PH: Who came up with the idea for the chart?

Adcock: Tom Fletcher started the first version of the “chart” in 2001, 2002 and 2003. It was created for cinematographer Peter Klein in Detroit who was being asked by his agency to shoot HD. The agency wanted to use the HVX-200 with 1/3” sensor and highly compressed camera. To the agency, HD was HD. Peter asked me for a document that he could use to explain to the agency producers the difference of the various options on the market. I created the document for Peter and it worked and the producer followed the DP recommendation. Peter shared the document with other DPs and I continued to hear great feedback. Showing the image size of the sensor(s) was a key component.

The document was created with this in mind so that a DP can use this with a producer. The chart also functioned as an in-house guide for Fletcher Camera Rentals in Chicago. In the beginning, it focused on popular cameras available for rent in the larger markets to help producers understand the needs and differences in cameras at the start of the HD era. The popularity of the chart started when Tom shared it with other rental houses that had shared information to help complete the data set.

I started regularly assisting Tom as a technical advisor for days along with Bob Primes, ASC; David Stump, ASC; Kees Van Oostrum ASC; Bill Bennett ASC along with various colorists, rental houses (Denny Clairmont was always helpful and never afraid to be critical with his opinion) and of course various camera manufacturers   and production assistants.  Around 2006 the amount of data-centric information in the chart started growing exponentially as professional camera systems started moving away from tape into digital capture. In 2017 I took over the reins as the main contact and producer for the chart as Tom assumed duties with one of the unaffiliated manufacturers.

PH: How long did it take from start to finish?

Adcock:  Well, it was weeks that blurred into months of work and it will never ever be really finished, there is far too many camera and information to be able to maintain this as a living archive. We had to cut tons of things out due to our restriction that everything fit on 2 pages of 8.5 x 11 paper. The biggest complaint we always hear is: “Why did you leave XYZ Camera off the chart?” There are only 13 to 15 lines available on the 2 pages!

Also, cameras must be for sale and SHIPPING at publication, just because a manufacturer wants something on the chart does not mean they get it.  We have had a number of companies upset with being left off, and while for the last few iterations of the chart have been dominated by RED and ARRI, over the life of the chart we have included Phantoms, DSLRs. and many other mainstream broadcast cameras.

PH: What was the hardest part of doing the chart?

Adcock: Deciding which cameras to include. Everyone wants his or her camera to be included. Fights in the early days on why specific cameras were left out were quite contentious. We had an on-going discussion with one filmmaker that was vehement that his camera was still a viable platform despite being designated as EOL (end of life) by the manufacturer.

The second hardest task is getting information from the manufacturers about power usage and what projects are being shot on their cameras, partially because we work ahead of project releases, we are constantly fighting for updated information that we can share.

PH: Would you change anything about the chart?

Adcock: Starting with the next chart we have talked about a sponsorship, the Camera Comparison Chart is viewed across our industry and around the world. It would be nice to be able to produce it in a couple of languages. We are working to have it translated into Chinese and Spanish as a start. I have heard a couple of manufacturers convert the chart into Japanese for their staff.

There have been requests for additional charts to focus in specific markets or say one for DSLRs and one for Rental.

PH: What has been the best/worst feedback so far?

Adcock: That’s easy. People are still married to their cameras, and when their new purchase “falls from grace” it can get ugly. People make a living with these tools and with the constantly changing camera market, it's tough to buy a $25K camera and then have it be outdated before you have paid it off.

On the other side, Tom and I get hundreds of Thank You emails from DPs, Producers, Educators and general people from all over the world telling us how much they appreciate our effort. I have seen printouts of the charts posted in rental facilities and schools around the world.

PH: Should we expect more comparison charts in the future?

Adcock: We have just completed the 10th year of the Camera Comparison Chart; it has changed a couple of times during its tenure. Let’s see where we go from here.

We would like to be able to produce other informational docs, but the time and effort needed limits how many projects we could take on.

PH: How should people use the chart? Don't they still go out and test shoot? So the chart might be a good starting point?

Adcock: It is a guide to recorded formats, recording media, bit depth and power consumption. It allows the viewer to make a qualified judgment on where they want their production to start. We don't account for shooting styles (though PL mounts do dominate) we focus on giving Producers, DPs and even students a comprehensive grasp of the available tools and technologies to use them. I love finding them blown up and mounted in rental houses, schools and even at a few sales departments.  We just put all the info together in a single place and we strongly suggest people test cameras for themselves.

PH: Anything you want to add?

Adcock: We would also like to thank the long list of people that assisted in producing this document and making into the industry guide it has become.

Thanks to all that offered assistance and feedback in the collection of the data: 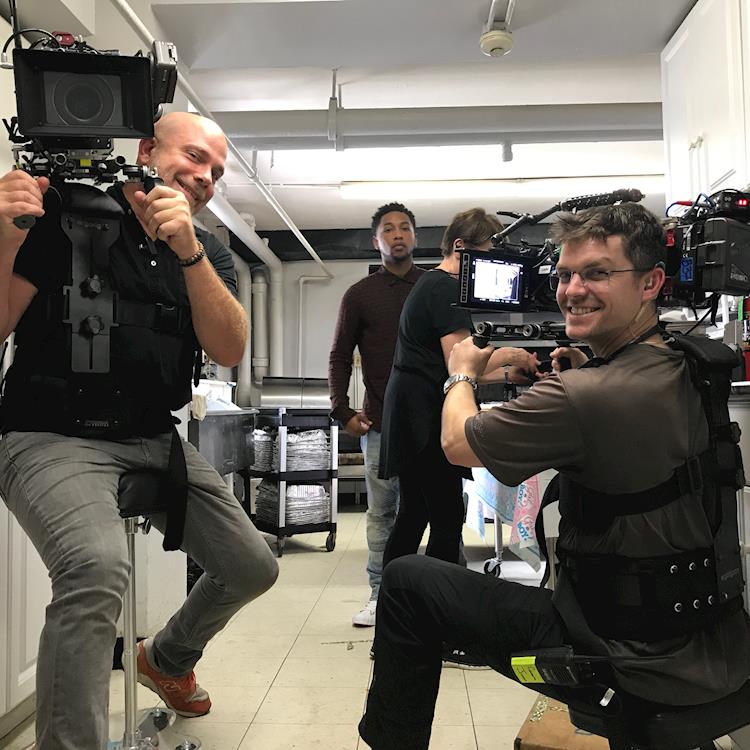