This is the 19th consecutive year I’ve attended NAB in quest of the ideal digital video camera, and ideally one that is somewhat affordable. Of course one man’s ideal is another’s disappointment, and likewise with affordable. However, at the largest production media trade show in the world, NAB 2015, there were more than a few cameras that nearly fit my criteria. This included wide dynamic range, a wide range of frame rates, more than one robust recording codec, smart design and of course great imaging.

To no one’s surprise, 4K cameras, recorders & lenses occupied center stage in Central Hall, the epicenter for hot new production gear, but they were also sprinkled across the landscape at NAB even in broadcast sectors. With the price of some 4K UHD TVs now dipping below $1k, broadcasters appear to be reckoning with the inevitability of a transition to 4K broadcast, starting with live coverage of special events and perhaps  to upgrading some familiar programming to 4K as well. The latter could create work for hire and business opportunities for early 4K adopters who can deliver 4K content in the format that clients demand.

Indeed, based on this year’s NAB, the 4K transition appears to be happening much faster than the prolonged transition from SDTV to HDTV that spanned nearly 2 decades. This year RED (Digital Cinema) celebrated the tenth anniversary of its 4K camera initiative. In fact, RED 4K cameras from RED One to Epic Dragon were in use for much of that decade, as reflected in RED’s highlights reel playing in their NAB booth theater, including many images familiar from the movies and brand-busting TV dramas like House of Cards.

True to form, RED capped off its anniversary with a major announcement-- its latest, greatest bar-raising camera.  Aptly named ‘Weapon’, it currently utilizes RED’s 19 MP Dragon sensor, but an 8K version is already under development. It does feature new advanced digital signal processing and can capture 6K video and stills simultaneously, at up to 100 fps each, and more than double that in 4K. In keeping with Moore’s Law, not only can it do considerably more than Epic, but in RED’s most compact and lightweight camera body ever. 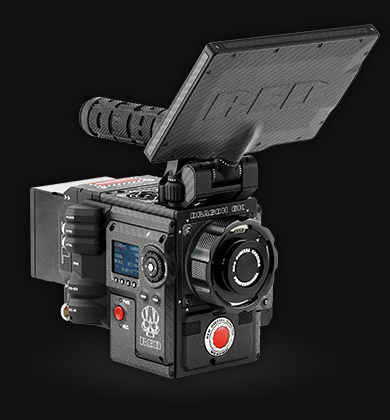 In fact both versions of Weapon are lighter and tighter than any Epic, both the Magnesium alloy and the carbon fiber versions. In fact, since the latter dissipates heat better than the magnesium version it can also outperform the magnesium option. Both feature an onboard stereo mic and other audio recording options, plus supporting 1D and 3D LUTs. Weapon also records in Apple Pro Res as well as RED code, and boasts up to 19 stops of dynamic range and has enhanced low light performance.


RED boosted the max capacity of their mini-mags to 1 TB to accommodate the increased data load with higher resolutions. Weapon can even be configured for live production and was used to livestream events from the RED booth at NAB (in 4K?).

Unfortunately, Weapon is not going to be ‘affordable’ like RED One was. It is more likely to cost at least $5-6k per 1K of resolution, except for Epic Dragon owners who can upgrade to the Weapon system starting at around $10k, with early Dragon adopters getting the sweetest deals.

While most camera manufacturers had at least several 4K cameras in their lineup, some like Arri, Blackmagic Cinema, JVC & SONY introduced several this year alone.

Canon, a 4K pioneer, was not among them, but did unveil a 4K upgrade to its popular C300 Cine camera. But, with a new 4K sensor and dual (Digic V) processors and much expanded processing power, 15 stops of dynamic range, internal recording of 4K @30p and up to 120p in a (2K) crop mode, this is actually a new camera with a familiar name and a new suffix. Even better, higher 2K/4K/HD frame rates will be attainable soon when RAW is output to external 4K recorders like Convergent Design’s Odyssey 7Q and Atomos’ Shogun. The C300 Mark II will be priced about the same as the original C300, ($17k-ish) so watch for big discounts on C300s when the Mark II hits the market. 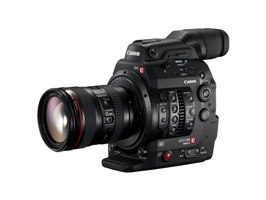 Perhaps an even bigger reveal by Canon was its XC10 4K camcorder, smaller than Canon’s C100 and around half the price. Yet the XC10 captures full 4K images (plus HD & stills) with 12 stops of dynamic range and includes a 10X lens and a rotatable LCD viewfinder, all for under $2.5k.

For those who already have a 4K camera with interchangeable lenses, Canon’s biggest announcement was their 20x mega zoom Cine lens. The 50-1000 mm field lens is ideal for sports and wildlife applications, but does require a large tripod and a lens cradle and/ or rails. Attendees were encouraged to zoom into the face of a (faux) gorilla perched in the rafters of the LVCC, more than half a football field away, Canon also expanded its line of 4K lenses to 6, with 3 primes and 3 zooms.

Arch rival Fujinon introduced an even bigger gun, but for sports and other live broadcast apps, and 80X (80x9)  box style lens and also a 22x8 EFP lens. Both have servo controls for zoom & focus and feature 2/3” B4 mounts adapted for full coverage of 4/3”  4K sensors. Fujinon also added a 25-300mm PL mount lens to their Cabrio ‘Budget’-series of Cine lenses.

Arri finally joined the  4K Express at NAB 2015, with 4 new (4K) cameras: Alexa 65, Alexa ST, Amira, Alexa Mini. While the Alexa 65 is designed for IMAX and other mega-screen productions and is priced for rental houses its (Arri) Amira-inspired technology has been incorporated into all Arri’s new Alexa's at NAB. Like SONY, RED & Panasonic, Arri  periodically upgrades its camera software to add features to and upgrade functions of each Alexa model so that they won’t become obsolete in just a few years. 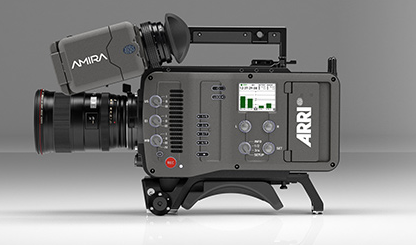 Besides adding 4K recording, Arri also added higher frame rates and 3D LUTs etc. to the Alexa SXT (super extended technology.) Some, but not all of these features will be available with the (4K) Alexa Mini camera head and with the Amira, which now records 4K at 30 fps internally in Pro Res & Arriraw (on CFast 2 cards) as does the Alexa Mini. Higher frame rates are attainable with both when output to Codex and other 4K recorders.

By far, SONY’s most acclaimed new 4K camera at NAB was the PXW-FS7, whose dynamic range of 14 stops, high sensitivity, compact size and ergonomic design make it ideal for docs and reality TV production. SONY incorporated many suggestions from leading documentarists around the globe in its final design. This spawned unique features like the customizable extended grip with lens control on a fully adjustable support arm for shooting at selectable angles. It can record 4K at up to 60p and HD (XAVC Intra) at up to 180 fps internally and 240 fps (HD) when output to ‘affordable’ 4K recorders like Convergent Design’s Odyssey 7Q, Atomos’ Shogun etc. plus 4K/2K RAW. 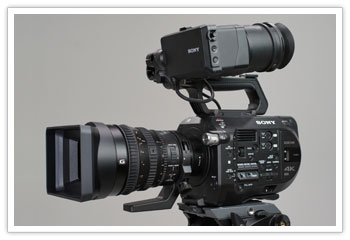 Not to neglect their existing 4K camera lineup, SONY released a major (software) upgrade for their F5 and F55 4K cameras just before NAB 2015, perhaps fearing that otherwise they would seem too similar to the FS7. There is no doubt that the closer you look, the more the FS7 seems like an F5 lite, for now. It will be interesting to see if the ‘lite’ suffix still applies after a year’s worth of updates, particularly when used with 4K recorders by SONY partners like Convergent Design and Atomos.

One weakness of the FS7 is 28-135mm F4 zoom currently packaged with it, sufficient for many but not all applications. But adapter specialists like MFT and Metabones already offer adapters from Nikon and Canon FD and EF mounts to the FS7’s E mount, and will likely offer still more in the coming months.

With Panasonic’s even more affordable answer to SONY’s FS7, the DVX200, you can bypass the lens selection issue altogether as it includes a 13X. The familiarly named DVX200 has an onboard 13X lens which covers the full 4/3 sensor. It records UHD (3840 x 2160) at up to 60 fps and HD at up to 120p and full 4K at lower frame rates. The DVX 200 also has curb-appeal with a transparent shield over its crimson-colored (recorder) back end for a sexy ‘techie look’ that could make it a standard fixture on reality TV sets, especially with its compactness, range of frame rates & other features all for less than $5k.

Panasonic’s 4K Varicam now includes a detachable camera head which captures UHD at up to 120 fps & HD up to 240 fps, umbilicled to the Varicam recorder. Also, soon, Panasonic’s LUMIX GH4’s firmware update will enable anamorphic capture in-camera (vs. only in Post). 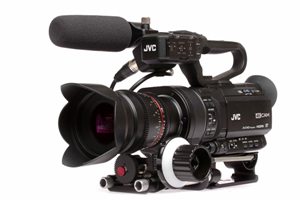 Among 38 new products at NAB 2015, Blackmagic Design introduced several new 4K cameras, notably URSA Mini with URSA’s 4K and 4.6K sensors & processing, but much more compact, and 1 vs. 3 LCD screens. It is compact and light for handheld shooting with several sensor/mount combos starting at $2500. Even smaller, the Micro Cinema camera, with super 16 mm sensor is based on BM’s Pocket Cinema camera and is ideal in tight quarters and on drones, for $1k. 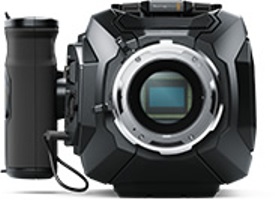 While previewed at NAB 2014, AJA’s CION was a full-featured working camera this year with 12 stops of dynamic range, optional internal color correction, while recording 4K RAW & Pro Res 422  to 60 fps,  AJA 4K Raw HFR to 120p.& HD to 180 fps. AJA is encouraging pros to #TryCION via its website.