Most people only deal with spooky characters & ghoulish sprits one month out of the year, but for Matt Scott, owner and chief artist of Von Grimm Productions, Halloween is an everyday occurrence. With over 13,000 hours in professionally operated haunted attractions as well as work in film and television, learn how to make it in the dark world of special effects, one horror story at a time.

Q: Why did you start a career in makeup and special effects?
A: I was always a fan of horror movies and effects even when I was a little kid. I got an early love for horror films. I watched Stephen King's IT when I was 4. I was also a fan of magic and illusion as a kid and to me, makeup effects are magic tricks. They are illusions in motion. I love being able to change a person's appearance or turn them into a creature or monster.


Q: What do you find is the most challenging part of creating such gory and scary make up effects?
A: One of the hardest parts for me is trying to make the effects look real and not comical. This is tough sometimes because, as I have heard other effects artists say, sometimes the real things look fake because people have becomes so used to the effects they see in films.


Q: Do you tend to be a bit more busy during the Halloween season? What projects are you currently working on?
A: ABSOLUTELY! Halloween season is the craziest time of year for me. It has always astonished me how many friends I have when it is time for Halloween parties and costume contests. I am currently the Head Makeup Artist for Death Yard Haunted Attraction in Hendersonville, TN, as well as independent films around the Southeast and Midwest. 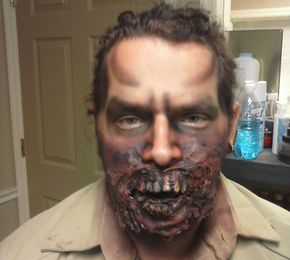 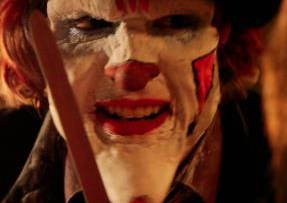 Q: What are a few major tips you would share with a production pro who is interested in getting into special effects?
A: STUDY! Always be studious with your craft. I am constantly reading and watching videos of reputable artist showing how to do effects. Also, no matter how much work you have done, never think you have mastered an effect or technique. I have done thousands upon thousands of basic latex and cotton build up makeups, however I Just recently saw a  tutorial where the great Rick Baker was doing one, and I have watched it several times and learned techniques and tricks I would have never thought of. There is always something to learn, even if it is as simple as a time saving technique, because in our business, time is a rare luxury. Another tip, and one I am glad someone shared with me, BE AVAILABLE. People aren't going to fly you across the country when they could hire someone down the street. You have to be willing to move and change your life to chase the dream. I have moved several times to get closer to work.

Q: What do you use to create your effects? What has been one of your favorite special effects looks thus far?
A: I use anything and everything to create the looks I am creating. Of course, I use all the standard materials. Latex, Silicone, and Gelatin, but I have learned that you have to think outside the box to create some effects. That is also something that will help you find work. If you know multiple ways to do an effect. Of course you can do it with the right stuff, but sometimes you are on a gig that has a shoestring budget and the director wants to have a character's hands grow back....how do you do it? You have to able to think on your feet. I would have to say my personal favorite look so far is one I did while working at Ripley's Haunted Adventure. I recreated Lon Chaney's Phantom of the Opera makeup and was very pleased with it, but none more pleased than when I showed it to Tom Savini and he complimented me on it, because Tom Savini and Lon Chaney are two of the biggest influences on my wanting to be a makeup artist. 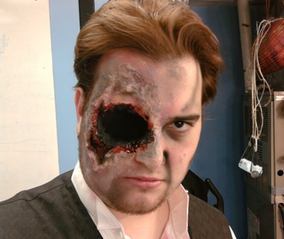 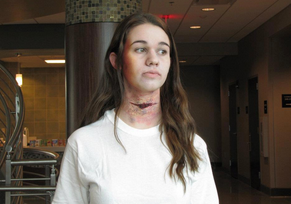 Q: What horror movies do you favor and gain inspiration from due to the amazing makeup and special effects created?A: There are so many! John Carpenter's The Thing, ANY Of The Living Dead movies, the A Nightmare on Elm Street series, and the Friday the 13th Series as well. I usually am watching some sort of horror film while sculpting or building an effect.

Q: Anything else you would like to add?
A: I would like to thank ProductionHUB for this interview, it has been a great honor. If you are interested in becoming a makeup effects artist or any other type of dream career you have...do it! No one can stop you from achieving what you want! I am a small town East Tennessee Hill Billy, but I have chosen to chase a dream in films, and I am so thankful that I have had the opportunity to do so and hope to continue climbing higher and higher!