From digital cameras to 8K workflows, video and sports production have been in a seemingly constant state of evolution. Veteran Steadicam operator and production specialist Alan Lennox has worked on everything from the Olympics to feature films and television episodes with new camera technology for decades.

Lennox joined camera and light manufacturer ARRI as the organization’s first Camera Stabilization Systems (CSS) Specialist, where he not only demonstrates camera stabilization systems to rental houses and studios, but trains new and veteran camera operators in the latest camera motion tools through the ARRI Academy. In fact, some of Lennox’s former trainees have become A-list camera operators who have worked on major motion pictures and television series. We caught up with Lennox to get his take on the latest industry trends.

Q: What are some of the general trends you’ve noticed over the last five years?

Alan Lennox: Over the last five years, there has been a massive uptick in the quantity of productions because of the streaming services. There’s a great demand for crew, and everyone seems to be moving up. Established people seem to be moving up within the industry while a number of new people are coming into the industry at the lower level. In some production jurisdictions, there is a shortage of skilled labor, such as artisans or camera operators, especially in the stabilization systems category.

At the same time, there’s been a democratization of the tools because of their affordability. We've seen this with ARRI’s Camera Stabilization Systems (CSS). Now, camera stabilization systems are more affordable and more accessible to a greater number of people and projects. This is good because there's a higher demand for people who can use these tools.

The competition for viewers is also increasing exponentially. With Apple TV, Amazon, and all of the other streaming platforms which are emerging, the competition for the viewer’s time is increasing. To compete in the market, you have to have all of the top technology to offer the best programming and employ it efficiently to stay on budget.

In the last five years, camera motion has been a critical part of the new look. The viewer is also becoming more educated and demanding. There’s a higher expectation on the content, and I think one of the things that directors and producers are doing is moving the camera more and more. They require the camera to move, be more subjective, and more involved. I think this leads to a greater opportunity for operators to be specialists who understand and can operate all of the new stabilization systems. 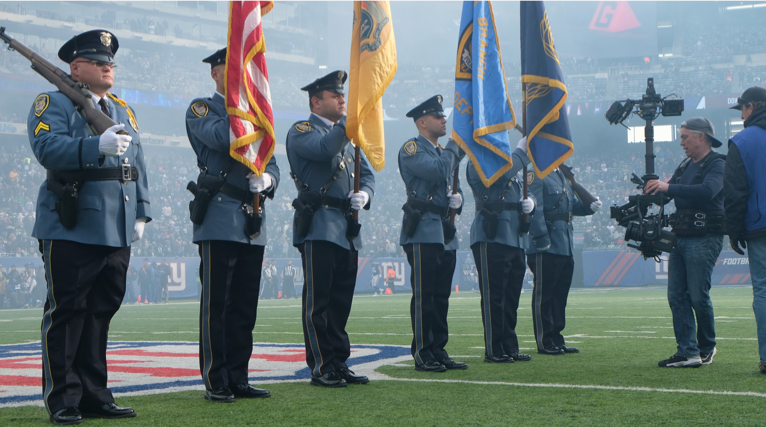 Q: Can you explain what you mean by moving the camera more? Haven’t operators always moved the camera? Can you give me an example?

AL: There is a lot more movement that is possible because of new tools such as gimbals, Steadicam-type tools, remote heads, and drones. These new stabilization tools can move the camera in a 3D space very efficiently and very effectively on any axis. So it becomes more subjective, and it also becomes more efficient, which is critical. Also, by moving the camera within a 3D space, we have repeatability now which is imperative for both broadcasters and filmmakers for tracking and visual effects.

Q: You’ve talked about how Steadicam and TRINITY operators were previously cost-prohibitive. Can you talk about what’s changed?

AL: When I first started in the industry, a Steadicam-type operator was a day call. You’d come in as a specialty operator for a set shot, and there was a cost associated with that. Over time, there’s been a movement to having that Steadicam operator available to you all of the time. Now on any decent sized show, there are generally two full-time operators, and one of them has a Steadicam, TRINITY, gimbal, or remote head. Those tools are now becoming ‘owner-operator’ tools. They are on the set full-time and I think that’s the way of the future.

The operator of the future will have the skills and access to all of the tools in the truck. So on the commercial or film, they’ll be able to bring the right tools to the shot rather than tailoring the shot to the available tools. Ultimately, that’s where we all want to be as filmmakers.

Q: What is it about ARRI’s line up of Camera Stabilization Systems that you find appealing?

AL: What’s nice about ARRI is that it’s not just a single device company. We don’t just do gimbals. We don’t just do Steadicam devices or remote-heads. We do all three, and it’s an organic component product line. The cables are similar and the software across the devices share a structure that is user-friendly. ARRI has the resources and is further committed to developing the tools and training for operators in the stabilization sector.

Alan Lennox has been a Steadicam operator for over 25 years. You can find him teaching Camera Stabilization Systems courses at the ARRI Academy or contact him at alennox@arri.com.

With headquarters located in Munich, Germany, ARRI was founded in 1917 and is the world's leading designer, manufacturer and distributor of motion picture camera, digital intermediate (DI) and lighting equipment. The ARRI group comprises a global network of subsidiaries and partners covering every facet of the film industry, including worldwide camera, grip and lighting equipment rental through ARRI Rental; turnkey lighting solutions through the ARRI System Group; and film production, postproduction, lab services, visual effects and distribution through ARRI Media.