Jules O'Loughlin, one of the cinematographers on Disney+’s Ms. Marvel (episodes 4 and 5), as well as FX's new drama series, The Old Man (3 and 4). She recently spoke with us about the portions of Ms. Marvel she worked on, which filmed in Thailand, which included extreme weather conditions and close collaboration with the VFX team. She also delved into working on The Old Man, based on a novel by Thomas Perry and set in North America, which required a much different perspective.

Ms. Marvel centers around Kamala Khan, an American Muslim teenager who struggles to fit in with her peers and at home. She is a fan of all superheroes, especially Captain Marvel, and one day she gets powers just like them, which launches her onto a whole new journey.

The Old Man tells the story of former CIA agent Dan Chase, portrayed by Jeff Bridges, who lives peacefully off the grid until he encounters an assassin sent to take him out. This is just the start of an FBI hunt for Chase that involves Harold Harper, John Lithgow, and a special ops contractor.

PH: Hi Jules, how are you? Can you start by sharing a bit of your background in the industry?

Jules O'Loughlin: I was born in the outskirts of Sydney, the youngest child in a family of 10. My father, a criminal lawyer, was an avid stills photographer – something I only found out later in life when I became the family archivist inheriting thousands of his slides, dozens of home 8mm movies, and a bundle of old, dusty cameras. Before a family trip to Europe, my father gave me my first camera. I was seven. Looking back on those early photographs, I was either an incredible abstract artist, or I couldn’t hold that camera still enough to keep the slow 35mm film in focus. It was the beginning of my love of photography.

In 2001 I gained entry to the national film school of Australia, AFTRS. Back then, AFTRS was a highly prestigious film school and notoriously difficult to gain entry to, taking only four students in each discipline. I graduated in 2004 with a Master of Arts specializing in cinematography. A year after graduating, a group of fellow graduates and I made our first feature film – a war film called KOKODA. The film gained me a great deal of notice in the Australian film industry playing at Camerimage in 2006 and earning me cinematography nominations for both AFI and the IF Awards.

My work on KOKODA brought to the attention of James Cameron – he loved how I used color to tell the story. In 2008 after a week-long interview on the set of AVATAR, he asked me to shoot the first 3D feature film in Australia - a cave diving adventure story called SANCTUM. I subsequently went on to work with Jim again, DPing his 3D Imax feature film JAMES CAMERON’S DEEP SEA CHALLENGE.

WISH YOU WERE HERE, which premiered at the Sundance Film Festival in 2012, was the film that opened the door to my US cinematography career. In 2013 I DP’d the first two seasons of the STARZ-produced TV series BLACK SAILS. Three US features quickly followed. THE WHOLE TRUTH, a courtroom drama starring Keanu Reeves and Renee Zellweger; THE DUEL, a Western starring Woody Harrelson and Liam Hemsworth; and KRAMPUS, a stylistic homage to the family horrors of the eighties. I’ve subsequently worked on three more series with the showrunners from BLACK SAILS; SEE, THE OLD MAN, and now PERCY JACKSON. I’ve also shot some big action films in London, including THE HITMAN’S BODYGUARD and ANGEL HAS FALLEN, amongst others.

PH: What were some of your motivators to become a cinematographer?

Jules O'Loughlin: At age nine, I saw the film 2001 – A SPACE ODYSSEY on the big screen. I consider this to be the film that opened my mind to the power of cinema. I wasn’t sure what I was watching, but I knew that it affected me in a profound and long-lasting way. It was THE RED SHOES, however, that started my romance with cinematography. It had such a profound effect on me, and I knew when I saw it that I wanted to learn to paint with light.

PH: Let's start with Ms. Marvel. How did you come to work on it? What enticed you about it?

Jules O'Loughlin: My agent Jasan Pagni put me in the mix for MS MARVEL. When I discovered that my two episodes of MS MARVEL were set in Pakistan and India and were to feature a period element, I was immediately excited by the creative opportunity this presented. Then when I met my director Sharmeen Obaid Chinoy she cemented this even further by expressing a strong desire to showcase Pakistan, her home, in an exciting visual way that steered clear of stereotypical tropes and colors associated with films from the region. She didn’t want it to look yellow and brown, and she wanted it to feel epic and exciting. A visceral world that was so rich you could taste it.

PH: What was it like filming in Thailand? How did you navigate extreme weather conditions?

Jules O'Loughlin: We filmed the episodes in Bangkok, doubling for Pakistan and partition era India in the height of the pandemic. Wearing PPE in 100% humidity is an experience that’s hard to forget. Working in extreme heat, coupled with lots of thunderstorms, was mainly challenging to our schedule because we had to stop anytime there was lightning nearby. However, the crew was awesome, taking the conditions in their stride. I love the Thai crew; they are beautiful, gentle, hard-working people, and they made a challenging shoot an incredible experience.

PH: Can you describe what collaboration looked like with the VFX team?

Jules O'Loughlin: It was a very close collaboration between director Sharmeen Obaid Chinoy, VFX Supervisor Nordin Rahhali, and myself. A sequence would begin with Sharmeen, and I shot listing and then storyboarding, and from there, if it had heavy VFX components, Nordin would have the sequence Pre-vized by his team. A pre-visualization is essentially an animation of the sequence with VFX ideas incorporated. We would then discuss and plan how these sequences were to be shot. Whether they involved blue screen elements or I had to deploy interactive lighting to augment the CGI being built. I nearly always used interactive lighting when it came to Kamala’s powers. I then had to plan with my gaffer how I was going to light those particular sequences, hiding as much as possible our interactive lighting units.

PH: Switching gears a little bit to The Old Man. How did you get involved with this project?

Jules O'Loughlin: I worked with the showrunners on two seasons of BLACK SAILS and SEE and when THE OLD MAN was green lit, they asked me to work with them again.

PH: What type of perspective did you have with The Old Man? How did this differ from Ms. Marvel?

Jules O'Loughlin: THE OLD MAN, based on a novel, was far more based in reality with a much more grounded aesthetic. The two projects are similar in the process because both were shoot in alternate locations due to the pandemic, making it impossible to shoot where the action takes place. THE OLD MAN was meant to shoot in part in Morocco, but the production got shut down in March 2020, along with everything else. When we resumed shooting later that year, production decided it was best to use the Blue Sky Ranch in Santa Clarita as our backlot, and we built sets and used VFX backgrounds to create the world we would have built in Morocco.

While both projects did have a realistic base dealing with real historical events, for MS MARVEL director Sharmeen and all the Pakistani actors who star in the show, it was essential to tell the story authentically whilst showcasing it as part of a high-octane coming-of-age superhero story. For THE OLD MAN, the story leaned itself to being gritty and raw. 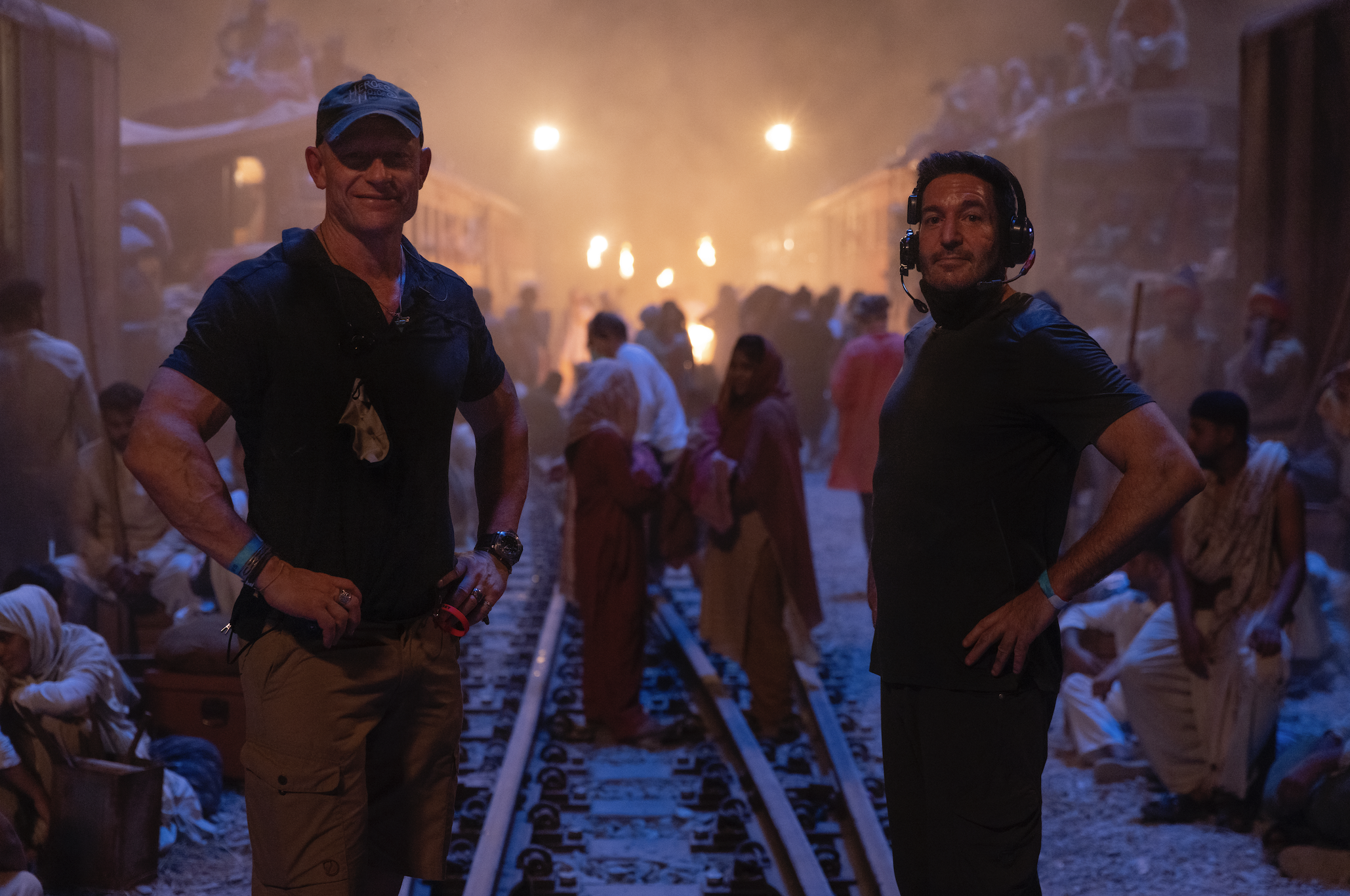 PH: What was it like shooting two projects back to back, considering their differences?

Jules O'Loughlin: I loved shooting both projects; they were challenging and exciting in very different ways.

Every filmmaking experience is intense, and we become close as a creative unit, and the outside world often ceases to exist. Both projects were shot during the pandemic, which added challenges not experienced before; however, the people I met on the journey made the experiences so profound. It’s always difficult to single people out because it is such a collaborative experience. Still, Jeff Bridges on THE OLD MAN was a dream to work with, a true cinema legend, and my director Sharmeen Obaid Chinoy on MS MARVEL is a force to be reckoned with, and I look forward to a long and creative partnership with her.

PH: What did you shoot on and why?

PH: What goes on in your mind before you start shooting? How do you prepare for each project?

Jules O'Loughlin: For me, the weeks up to a shoot are all about learning the process of my director and having a plan. Then all the prep we do is based on the story we are setting out to tell. Once the story elements are clearly defined, I will start working on a visual palate that combines lighting, lensing, and camera movement. Finally, I will break down the script accordingly and put my plan into an excel spreadsheet outlining every idea and technical consideration, from the gear used to the creative techniques I’ll utilize. With this document, I can be anywhere along the show timeline and know what I need to do to achieve the look I’ve planned and satisfy the story elements that need to be told. It’s my roadmap.

PH: After years in the industry, what are some of the biggest lesson(s) you've learned?

PH: In your opinion, a great cinematographer has to embody what characteristics/qualities?

Jules O'Loughlin: The ability to listen, the intuition to trust your gut, and really good bladder control :).

Jules O'Loughlin: I’m back working with the team from THE OLD MAN on the PERCY JACKSON TV series for Disney +.