One of the biggest pressures the production industry faces today is the creation of engaging content; content that moves and captivates anyone who views it, ultimately pulling them in to the point of no return where they keep returning for more. This type of content is easily digestable and keeps the consumer on his or her toes, always wanting (and expecting) more.

Last week at the third annual NYC Television Week, some of the top industry leaders in broadcast, cable, advertising and technology, came together to deliver their take on the industry's current trends at four informative shows: Advanced Advertising, The Content Show, Next TV Summit and the Hispanic TV Summit, at the Waldorf Astoria and Park Central Hotel.

While television was a word frequently heard throughout the hotel hallways, more of the focus was centered on content creation: when to do it, how to do it, etc. ProductionHUB picked up a few recurring trends of our own at the NYC event.

Here are some of the trending topics we noticed:

Today we are all ready to position ourselves as content aggregators and thought leaders by blogging, tweeting, creating videos, etc. One clear message that could not be ignored at the show was the important role that branding plays (or should play) in your content strategy. And if it isn't playing a role, you may be wasting your time. The organizational principal for branding is described best by Henry Scheiff, Group President at Investigation Discovery, who says "[branding] is the way of telling an audience what to expect on their journey to their destination."

Otto Bell, VP & Group Creative Director at Courageous, mentions in his session, "Brand-Driven Content Development Process" that branding is bigger than ever and it's "something that can only live on our channel. You have to dimensionalize the brand while staying true to it." 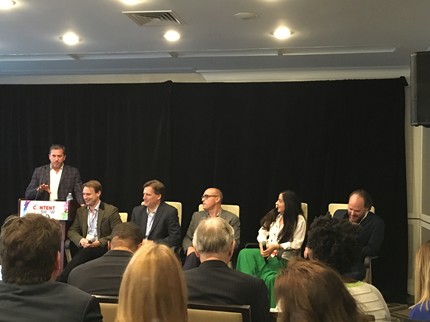 This goes hand in hand with content as well. If you are creating content that is specific to your company, something that stands out, the right people will take notice.

Should branding be obvious?

"People don't want to be insulted..." says Donny Deutsch, star of the new USA Network TV show, Donny! He mentions the approach he has taken with his show and branding, how it has been super successful finding humorous ways to include brands in an obvious way. "The (advertising) lines are becoming blurred...Let's embrace it."

According to Jared Pearlman, Head of Content at UEG, integrating content just because you can, will not equal success. "You have to make the brand enrich the content. When it doesn't, you'll  never be successful."

"Back in the day" we would always have to anxiously anticipate for every Thursday to roll around so that we could watch our favorite TV show. With the introduction of major services like Netflix, Hulu, etc., our favorite shows are with us any day at any time. Users are relying heavily on DVR and online streaming. Very rarely is anyone home at 8 pm on a Wednesday night to watch the newest episode (and they no longer have to be).

"Technology is changing the way consumers view content. Everything is now controlled by the consumer," says James Petretti, SVP US Research and Analytics for Sony.

In other words "over-the-top" content that connects the linear and digital worlds. It refers to the delivery of content through the Internet, instead of having to sign up with a cable provider.

What does this mean for cable providers?

With the rise of Netflix, Hulu and others, TV ratings are beginning to drop, mostly because of how accessible the content is at anytime of day, right on your laptop, mobile device, etc. But TV networks are embracing this change by welcoming their own over-the-top video services. Some of these networks include Showtime, CBS and Lifetime. Youtube, Vimeo and more are also taking part.

CRO & EVP at Dick Clark Productions, Greg Economou, discusses how brand promotion through social media channels is also increasing revenue. "As important as the content is, it's the context that makes the difference."

The importance of social media was also heavily discussed...how promotion of brands and shows through social has proven to increase the amount of traffic driven to particular events and TV shows.

Get used to OTT streaming because it's not going anywhere anytime soon. Consumer use of video streaming services is on the rise. There is less supply for TV ads and a growing demand for ad spend on video-on-demand will continue to increase drastically by 2019.

These days it seems as though every time you click through a channel there's a reality show on: Survivor, The Jersey Shore, The Bachelorette, and plenty of others. Non-scripted TV definitely took the TV world by storm a few years ago, and still has its appeal. But don't count out scripted TV just yet.

The key to great content, and (in NYC Television Week's case) a great show, is accomplished through great storytelling.

The way we tell stories hasn't changed much, according to Scheiff. He references storytelling all the way to the age of cavemen, retelling how they too created content with charcoal on walls. "I think we have better charcoal and we don't have to use the wall anymore."

The need for great storytelling is higher than ever and the trends in dramatic programming are shifting. The "Return of Scripted (Finally)" panel at The Content Show discussed in great detail the demand for captivating content starting with episode one.

EVP, Drama Development at NBC Entertainment, Pearlena Igbokwe, mentions "...if they aren't blown away by episode one, you've lost them..."  And what can help you get your foot in the doorway? "A great idea...you have to partner with production companies that have done this before. Arm yourself with as much as possible."

Another reason scripted is on the rise yet again is because advertisers pay significantly higher commercial rates for successful scripted shows. Cable providers are coming up with new ways to reel in returning viewers and gain new ones.

What role does social media play?

Whereas a push on social media doesn't exactly translate into higher TV ratings, it does play an extremely important role in the distribution of content.

Start thinking of social media as a content vehicle

According to Pearlman, "Audience members trust social influencers over their friends." A shocking reveal that a lot of other panel members agreed with, including Beth Greve, CRO, AwesomenessTV. "If you capture someone at 18 (especially on social) 62% will stick with you later on."

Here are a few worthy bits of information from the "Opportunities and Appetites in Pop Culture Content" panel:

President of Pop, Brad Schwartz, determines that you shouldn't be posting on social media just to post. "Everything you do has to have social currency. If it's not worthy enough to be passed along, don't post." 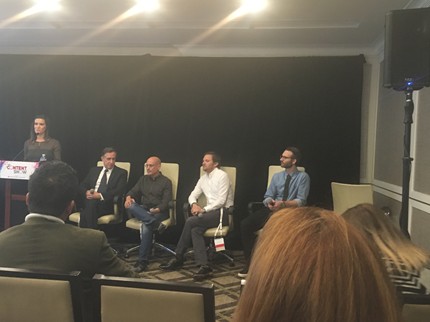 For companies like AOL, mobile has been the area that has received the greatest amount of content consumption. The introduction of new social media platforms such as Periscope and Snapchat have opened up a whole new portal for content consumption, in a way that speaks directly to millennials.

By far, every industry professional had the same thing to say about great content...it will always have an audience. It's all about starting with a core idea and determining how you will make that idea happen across all channels.

VP/Group Publisher, Multichannel News Broadcasting & Cable, Next TV, Ratings Intelligence, said it best... "While content may be king, without a kingdom, kings do get cancelled."