Re-creating the past can be challenging for filmmakers, especially when tasked to duplicate the look of a particular time in history for a period movie. Add a tight budget, cramped locations, and underwater photography, and you have the situation James Chressanthis, ASC, faced as cinematographer for the movie The Watsons Go to Birmingham. Based on the novel by Christopher Paul Curtis, the film depicts a fictional family’s 1963 road trip intersecting with an actual terrorist bombing during the civil-rights era. To help with some of the film’s challenging production requirements, Chressanthis used two EOS C300 Digital Cinema cameras and EF-series lenses from Canon U.S.A., Inc., a leader in digital imaging solutions.

"The Canon EOS C300 camera is a lightweight camera that’s very agile and easy to hold steady because it has just enough weight and bulk to it," Chressanthis said, noting that he worked with two full crews and two camera operators. Five different portions of the movie relied on the Canon EOS C300 Digital Cinema camera’s compact size, high mobility, and other advantages. Those portions included interior car photography during the Watson family’s road trip, a crucial scene in a tiny bathroom, a near-drowning sequence in a lake, faux home movies seen under the opening and closing credits, and the re-creation of 1963 newsreels. The newsreels required sophisticated postproduction software to degrade the superb image quality of the EOS C300 camera’s footage so that it would match the flicker, dirt, and grain of actual newsreels from that era.

"The wide exposure latitude of the Canon EOS C300 camera allowed us to re-create the film newsreels of 1963," Chressanthis explained. "We created our own newsreel footage and flashback scenes to introduce our characters into those newsreels. All of it had to integrate with real archival newsreel footage of civil rights demonstrations, and we were quite successful in doing that."

Other imaging formats used to duplicate the look of old newsreels included Super-8mm film cameras and the Canon XF100 HD video camcorder. "The Canon XF100 is a super-light camera; I call it the ‘news journalist camera,’" Chressanthis noted. "It would be my camera of choice if I had to go to Afghanistan because it is so tiny. The fact that it is so tiny made it a little less stable, but I would turn its built-in Canon optical image stabilizer on or off, depending on the needs of the scene."

Grain, noise, and other image artifacts were not added to the home movie sequences shot with the Canon EOS C300 Digital Cinema cameras, Chressanthis added. "We instead turned those into really clean, crisp, beautiful black & white images, which included live-action home movies of the family and still portraits that were used as freeze-frames and stills in sequence."

"I was in the back seat of the second car covering the actors with the Canon EOS C300 camera," Chressanthis revealed. "The lighting was very difficult because we had to balance the high contrast of the interior of the car to the exterior of the highway. Also, we were shooting an African American family, so skin tones were a concern in the shadows, and we had a very, very bright daylight exterior. Frankly, I was concerned whether the Canon EOS C300 camera could hold both the shadows and the highlights. All we had for the interior of the car was a Lite Panel LED as a fill light/eye light, which is not very powerful. What I found was that the Canon EOS C300 camera not only held the shadows and highlights, I was able to expose more for the highlights "protect the highlights" especially in the passing landscape and in the glimpses of light from the chrome on the old Plymouth. In the final color correction I also had the ability to ‘dig into the shadows.’ We got a great balance, a great image, and all of that visual material is seen in the movie."

"We always shoot Canon Log," he noted."It would be crazy not to. It gives you the maximum latitude recorded on the camera. We recorded in Log C on the other digital cinematography camera, and everything intercut very, very nicely." 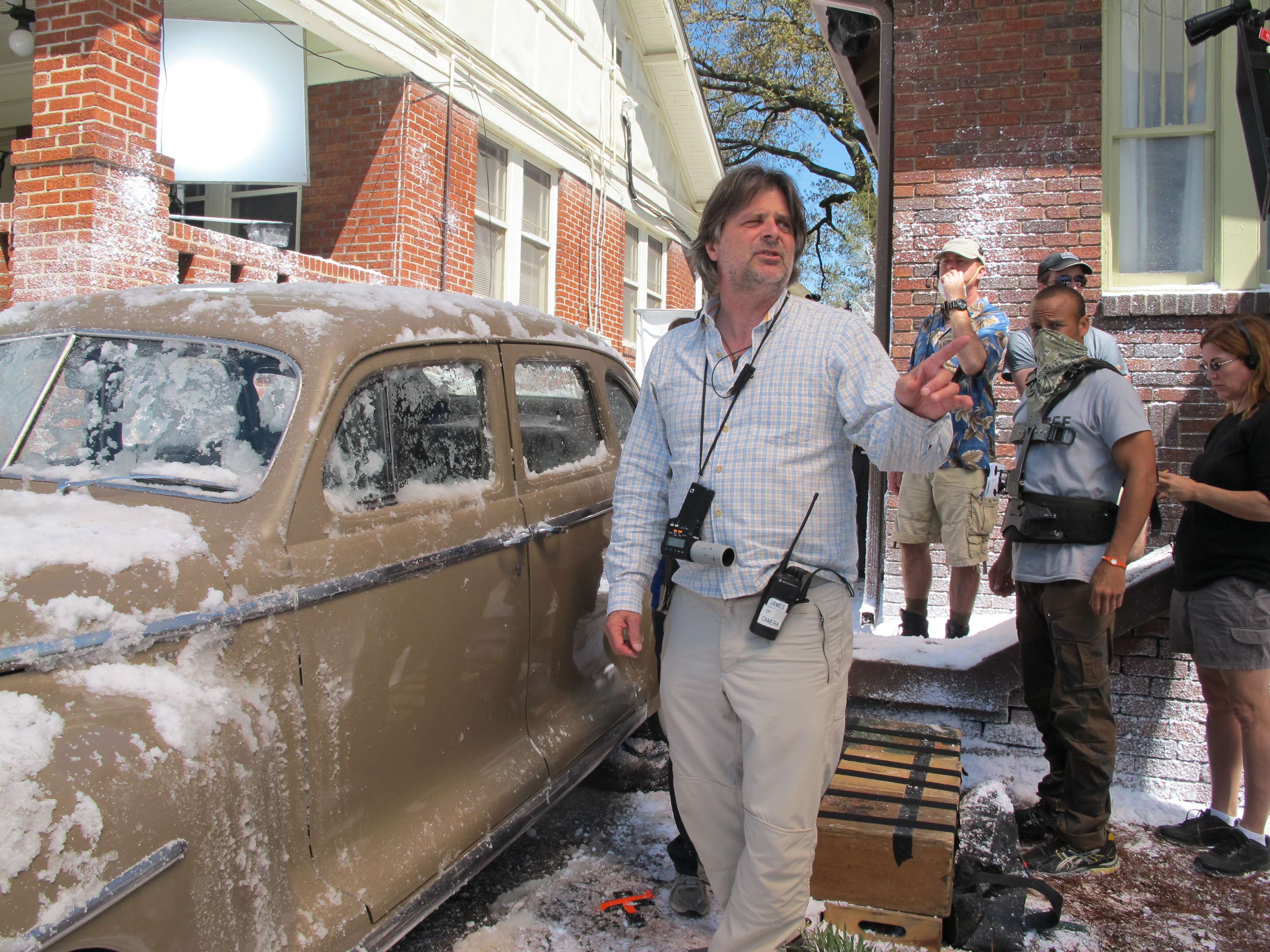 Steady Images
In addition to the cinematic image quality, compact size, and low-light capabilities of the Canon EOS C300 Digital Cinema camera, another crucial factor contributing to its success in capturing challenging footage for The Watsons Go to Birmingham was Chressanthis’ use of Canon image-stabilized EF-Series lenses, in particular the EF 24-70mm f/4L IS USM standard zoom. With up to four stops of stabilization, the lens compensates for multiple kinds of camera shake, which can ruin a shot, especially in close quarters.

"The Canon EF 24-70mm f/4L IS USM image-stabilized lens was our workhorse," Chressanthis explained. "Stabilization was critical for nearly all the handheld Canon EOS C300 camera work. The 1949 Plymouth didn’t have the greatest suspension, so the image stabilization on the EF 24-70mm zoom was a real plus for shooting inside that car. By using that lens on the EOS C300 camera, I was able to do hand- held shots without a mount or a special head, and I had the mobility to do little camera moves inside the car. We also used that lens to shoot a key scene inside a very small bathroom in an actual 1920’s house. The scene featured two of the Watson children having a heart-to-heart talk, and the image stabilization on the EF 24-70mm zoom let us shoot hand-held very close to the actors. The 24-70mm is a terrific lens with great coatings to help minimize flare and veiling glare, and when it did flare, it flared in a nice way."

Chressanthis also used a Canon EF 16-35mm f/2.8L II USM ultra-wide zoom on an EOS C300 Cinema camera inside a Gates underwater housing to shoot a sequence in which the older Watson boy saves his younger brother Kenny "the narrator of the film" from drowning. Chressanthis hand-held a second EOS C300 Digital Cinema camera outfitted with the EF 24-70mm zoom lens above the water to film this action sequence, which was also captured on-shore by the other digital cinematography camera.

"Again, the lightness of the Canon EOS C300 Cinema cameras was an advantage," Chressanthis recalled. "We were able to take the kids from deep water to the shore, all continuous with two cameras without cutting. "It was such a good angle I just kept shooting, and we had no problems in post intercutting between the two Canon EOS C300 cameras and the other camera on shore. Using those Canon zooms made shooting very easy, and it’s a real testament to the quality of both the lenses and the EOS C300 cameras that they intercut with the other, more expensive cinematography camera and lenses we were using. Canon EF-Series lenses are surprisingly good, and they provide cost-benefits for cinema use." 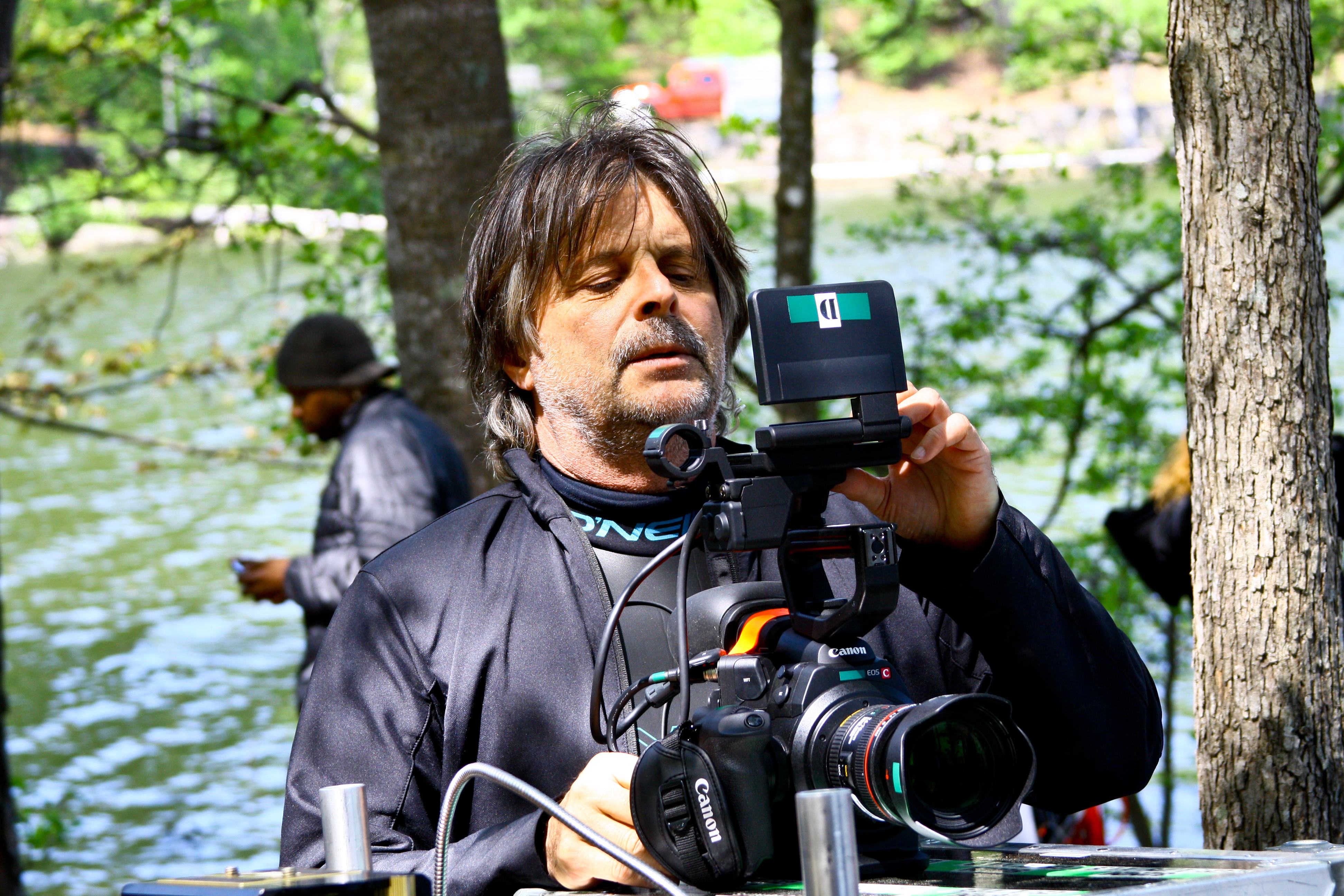 Day of Infamy
The story of The Watsons Go to Birmingham culminates in a re-creation of the aftermath of the actual terrorist racial bombing of the 16th Street Baptist Church on the morning of September 15, 1963, in which four little girls were killed while attending Sunday school, and 22 others were injured. The filmmakers built a replica of the bombed section of the church, which was combined with an existing building to achieve the realism necessary for capturing Canon EOS C300 camera footage shot in 1963-newsreel style. Chressanthis studied archival press stills to re-create the look.

"The Canon EOS C300 camera really made that sequence," Chressanthis said. "There are 50 handheld shots in there all intercut cleanly with newsreels. We also filmed a scene showing the whole neighborhood descending upon the church with shovels and axes to rescue people buried in the wreckage. The EOS C300 camera wasn’t the only camera used for that scene, but its small size and mobility really made the difference. Every take we did, I moved the EOS C300 camera, which made every shot unique. I held it and filmed as I ran down the street alongside extras portraying horrified parents and other citizens running to the church. There were bits of fire, smoke, and debris everywhere, so I was able to hide the camera right in the shots. In one shot I put the EOS C300 camera on the ground under a car. In another I filmed young extras being carried out of the rubble, and once they were out of frame I ran over and picked up the camera to continue the shot. The EOS C300 camera reminded me of old-school 16mm filmmaking in the Sixties in terms of its ergonomics and ease-of-use."

Postproduction on The Watsons Go to Birmingham proceeded smoothly, Chressanthis reported, with Canon Log helping to ensure the smooth intercutting of different camera imaging formats. "We are projecting this film in a big theatre, so I was very conscious of its image quality during post. When we color-timed the film I projected it on a big screen to reveal any image issues. Eventually the film is going to be shown in 2K on a 4K display, so you’ll notice every detail. The latitude of the Canon EOS C300 camera is very, very good. Based on the imaging performance of the EOS C300 camera, I look forward to using Canon’s 4K Canon EOS C500 Cinema camera."