The LiveU Solo delivers when it matters the most. In game, live and with no loss of continuity! And continuity is so important. I thought about that as I was getting ready to shoot a couple of important basketball games. I should say very important games since it was going test it out for my daughter’s team. No pressure!

After setting up, I had other shooters coming over to check out the LiveU Solo. Lots of questions came flying my way. What is that? How does it work? Are you going live? How are you doing that?

You know you have a good thing going when other shooters start checking out what YOU got going on. So I got through that part then it was all down to business. But I am getting ahead of myself so let me back up a little bit first. 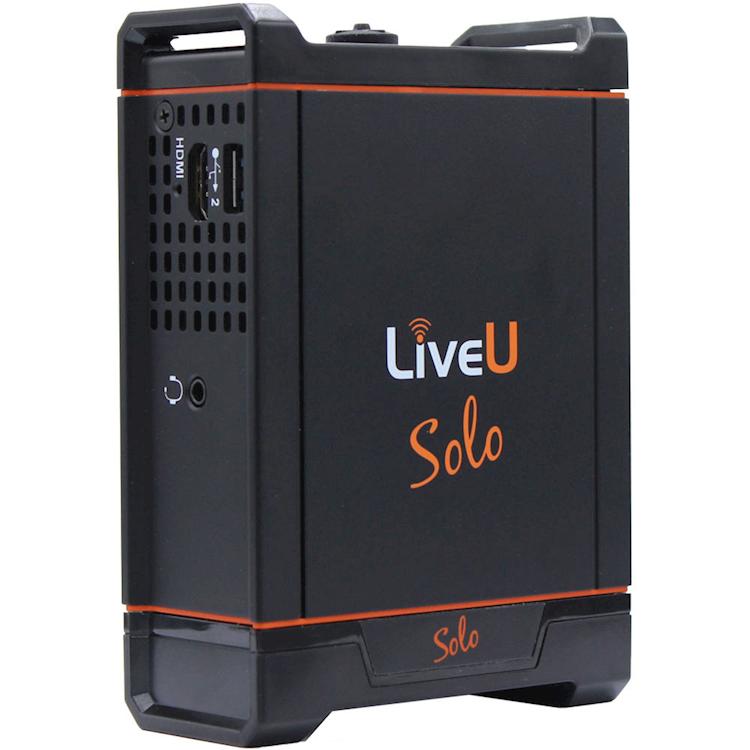 How Does LiveU Solo Work?

LiveU Solo is a cool live streaming device that leverages LiveU broadcast technology that television broadcasters use for their live remote coverage instead of satellite uplink or microwave technologies. The LiveU Reliable Transport (LRT) and patented cellular bonding creates a single, robust connection and adapts the video quality to changing conditions so you don’t lose a stream and always stream with the best possible quality. This ensures continuity and a higher quality stream even when you’re originating from places where the bandwidth is limited to location, network congestion, or cost. There are a few more technical highlights for the LiveU Solo but I want to get to some other key and interesting product points first.

When the LiveU Solo showed up on my doorstep I was honestly surprised. I thought the whole unit was going to be larger physically and more complicated. There was this little box and that was it. Included was the LiveU Solo unit, a variety of cables, the USB dongles, A/C and an easy to follow quick start guide.

Overall, the unit was a little bigger than the size of typical intercom box and heavier. You can use the belt clip on the pouch without any adverse effects. It's well constructed, and in my opinion, would last a good while in the field. I was inside so I can’t say how the unit would handle inclement weather, but I think it would do okay for a while.

All connect points were easy to access. I liked that the unit was well ventilated for long shoots. It came with a nice pouch that had the nice touch of elastic straps to take the stress off of connectors and to dress up the cables. I stuck a pen in there too. The unit weighed in at about a pound or so. It also has an Ethernet port, two USB ports and an HDMI port.

First, you register the device and then decide what your choice of distribution is. YouTube, Facebook, Vimeo, and others — whatever works for you. That's the nice part because you are not locked into one choice of streaming. Myself, I like YouTube and Vimeo.

From the portal, you set your stream title, description and adjust any “advanced” settings that are needed. It all depends on how you decide to work. Then you save it, hit “start broadcast”. You will see a confidence screen in the window confirming you are live and it's off to the races.

As I started to say earlier, the LiveU Solo worked exactly as advertised. I set up just like a normal shoot. Then the only other step was to connect the LiveU Solo. Each test lasted about an hour each and there was no loss of signal for either shoot. 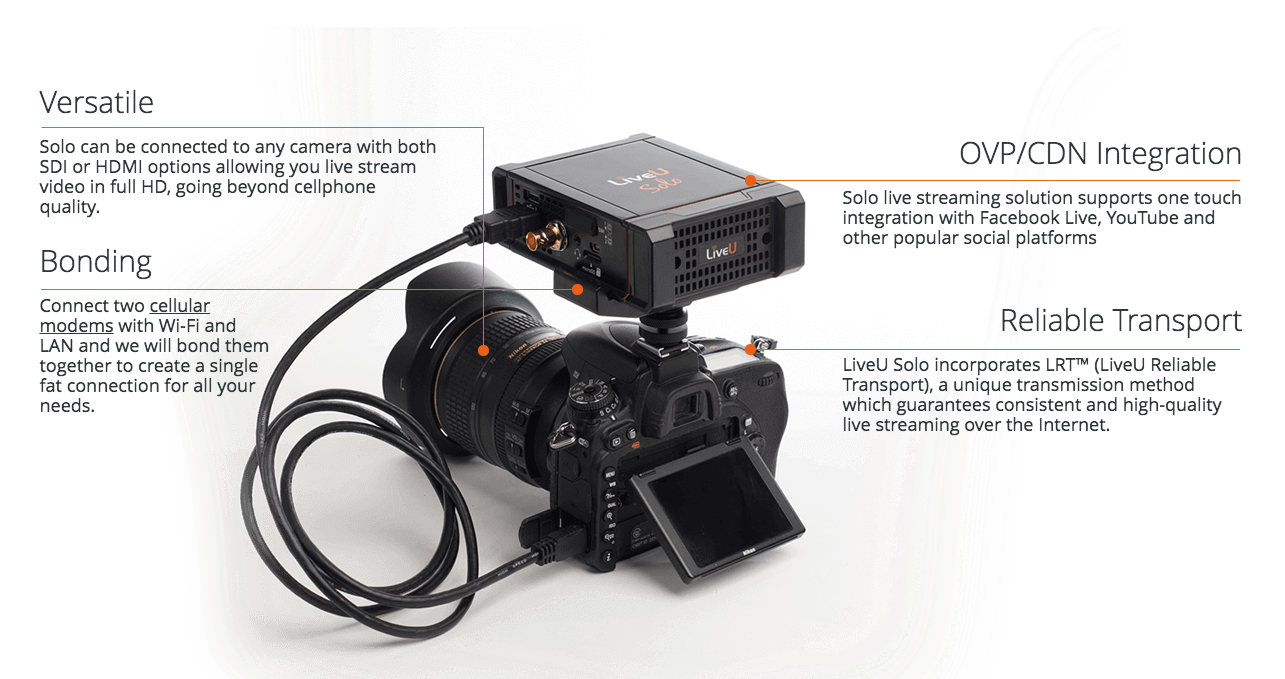 Next Up for the LiveU Solo

I spoke with Claudia Barbiero, Vice President of Marketing for LiveU. Here is what she had to say about the future of the LiveU Solo.

“Our flagship product for online live streaming is LiveU Solo. We are continually making enhancements to the portal to make it easier to use and add more functionality. We just previewed live graphics through the Solo portal at NAB. One of the biggest things everyone wants to do initially is just get online. Once they get online and have a quality program then it is ‘what else can I do to enhance my production value?’ The number one thing people want to be able to do is put a logo on something or for sports, show a score.” Barbiero concludes with these thoughts.

“Our whole premise and platform is to be open and integrated so any graphics package or switching company you want to use can integrate seamlessly with. We also wanted to add a feature so that if someone just wanted to turn on some basic or even more advanced graphics through the same interface. Now they can.”

Summing It All Up

The LiveU Solo takeaways are pretty straightforward. It's easy to use with no loss of signals and very affordable live streaming. For my money, the Live U Solo is a no-brainer.