As we start winding towards the dog days of summer, I was recently given the opportunity to get in front of the URSA Mini Pro 4.6K and the DaVinci Resolve Control Panel. This was a new and different approach to looking at products that come through the doors at ProductionHUB. Normally we might get a camera or lighting kit but to get two production/post production related products together was cool. As a production professional (like many of you) I am always looking at the budget and ways to control costs. So the idea of being able to upgrade in the field and enhance the post-production suite without crushing the budget was enticing to say the least. But before I get there, lets take a look at where production always has to start. It starts with the camera of course.

Solid, very solid. Did I say solid? Weighing in at 5.1 lbs. the URSA MiniPro 4.6K had a certain heft to it. It wasn’t heavy to me at all. But if you are used to a smaller unit like a DSLR then the URSA might be on the heavy side for you. I thought the camera was ergonomically easy to hold and shoot with for an extended period of time. Part and parcel to that though was the fact that the
camera I reviewed came along with the outrigger handle, optional shoulder mount with tripod quick release, and a very good viewfinder (optional). Although we were set up for EF mount lens, users can also opt for the adapter kit that will allow other lens to be utilized, which is a big plus if you already own another type of lens and are partial to them, or you just want the option of being able to use something else as your lens.

Shooting in a variety of challenging conditions, I found the URSA Mini Pro 4.6K to be very responsive and adaptable even in what many might consider poor lighting conditions. As I stepped through the various levels of gain, I didn't really start to notice signal noise until I got up to XX dbs. But with the 4.6K sensor I never felt as thought there were too many shots that would have been out of  reach. On the other side of the equation I made it a point to really try to push up and over the point of no return when it came to blown out exposures. Remember, 15 stops of dynamic range. Again, the URSA Mini Pro 4.6K responded like a champ, bringing home some very nice images without killing the budget. Oh yeah and before I get to the impressive specifications of the camera, one thing really stuck out on the positive - the ability to record on both SD cards and CFast cards.

Yes I know that a lot of shooters would say OK, but I would say the idea of flexibility and the ability to keep shooting is and will continue to be a big factor for me. There are some more really impressive features. Of course being an old school shooter I like a camera that has all the controls where I can get to them.

The URSA Mini Pro has what I call “get to” control. The controls are laid out in a way that makes them easy to remember, so you’ll be able to adjust settings, use ND filters, change frame rate without having to look at the buttons or take the camera off of your shoulder. It also features high quality, neutral density (ND) filters. The 2, 4 and 6 stop filters have been specifically designed to match the colorimetry and color science of URSA Mini Pro, providing you with additional latitude, even under harsh lighting conditions. (More on this matching thing in a bit.) This allows different combinations of aperture and shutter angle to achieve shallower depth of field, or specific levels of motion blur, in a wider range of situations. The IR filters have been designed to filter both optical wavelengths and IR wavelengths.

Blackmagic URSA Mini Pro has multiple connections such as 12G-SDI out, HD- SDI monitoring out, 2 LANC inputs, balanced XLR audio with phantom power, time code in and reference input. On the front right side of the camera is a 12 pin control connector for broadcast lenses. There’s also a 4 pin XLR DC and an HD-SDI monitoring output that are located in good position for connecting an optional viewfinder or on set monitor. The 12G-SDI output handles all formats up to 2160p60 using a single BNC cable, and also switches to 6G-SDI or HD-SDI depending on the shooting format.

From a functionality and price point the URSA MiniPro 4.6K has some solid things going on, but then Blackmagic Design ups the game even more. Check this out. The URSA Mini Pro 4.6K can shoot at high frame rates and then play it back at the edit frame rate to get smooth slow motion. It made for a really nice professional look. Think of sports like horse or auto racing. It is a natural fit. One can even set an “off speed” frame rate, then alternate frame rates via a button of the exterior of the camera. Not having to think about the “how” made it easier just to go from standard to high frame rates. The URSA Mini Pro 4.6K can capture full res 4.6K recordings at 60 frames a second. So for my money the URSA Mini Pro 4.6K might just be one of the best values going in this particular space today.

Why? Well for a pretty reasonable price you get the 4.6K sensor 15 stops of dynamic range, an easy to use and ergonomically friendly camera that you can put your favorite lens on and enough range to cover a lot of different types of shooting situations that the indie shooter might face. But here is where I think this whole thing gets very interesting. All URSA cameras include a full version of DaVinci Resolve Studio. DaVinci Resolve Studio is editing and color correction software that features an advanced, multi layer timeline with powerful editing and trimming tools, along with advanced creative color correction and creative grading tools. With URSA Mini Pro 4.6K and the DaVinci Resolve, you get a complete production and post production solution. Then on top of that, add the Davinci Resolve Micro Panel and you might not want to ever leave the post suite.

Kidding of course. But I took on the Micro Panel because I wanted to see how it would fit in the flow. As we say in these parts “like butter.” Tactile control is nearly perfect. Honestly, it took the process to whole other level. It was, how do I say it? A very comfortable experience. Right out of the box, connected via one control cable, which also provided power and we were on our way. It features three high-resolution, weighted trackballs and 12 control knobs for accessing essential primary color-correction tools in the Resolve software. Eighteen dedicated keys on the right side also give you access to the most commonly used grading features and playback controls. The fact that I could get away from having to perform every last function on the keyboard was a definite game changer for me. Look how much detail you can get into.

Color Boost Control: Raise the saturation in regions of the image with low saturation while leaving properly saturated areas alone. Also known as a vibrance operation, this is useful for adding color without over saturating the image.
Shadow Control: Selectively lighten or darken shadow detail without affecting your images mid-tones.
Highlight Control: Enable retrieving blown out highlight detail in high dynamic range media by lowering this parameter. This allows you to achieve a smooth blend between the retrieved highlights and unadjusted mid tones for a natural-looking image.

Increases or decreases overall image saturation, you can turn your color image into a grayscale image with this control.

Hue Control: Rotate all hues of the image around 360° of the color wheel. The default setting is 50, which retains the original distribution of hues.
Luminance Mix Control: Control the balance between the YRGB adjustments and Y only adjustments made using the Y channel lift, gamma, and gain controls.

I also think that the Micro Panel controller should not be considered an “add on.” Why? For the price point I think that there would be a lot of new “colorists” that might just start here instead of the keyboard. Was there a pretty good learning curve? Shooter first, post second. Well yes to be quite honest there was a good curve. But if given more time I am convinced the rest would have come in short order. It was fun to be able to fly the Micro Panel and see what it could do. If I was building a small to medium suite, the DaVinci Resolve Micro Panel would be on the must get list.

This was one of the most practical, yet fun types of reviews I have done in quite some time. The ability to combine products from field to post was a positive one. The URSA Mini Pro 4.6K packed a lot into a small form and will give indie shooters a lot of range for the buck. Then when you add the DaVinci Micro Panel to the mix and give that same person the ability to correct in the field or in the suite without going broke that's a big plus. It had a big professional feel to it and even though I am pretty convinced I wont be challenging any pro colorists soon, with time (and practice) the DaVinci Resolve Micro Panel would be a great starting point when one wants to bring post to the next level.

One last thing. Thanks Blackmagic Design for the backlit control keys on the DaVinci Resolve Micro Panel. My eyes say thanks! 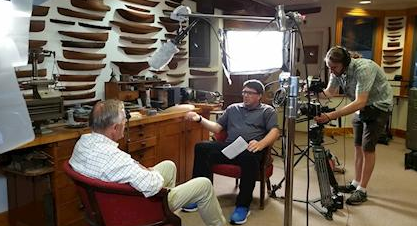 Mark Foley is the Technology Editor for ProductionHUB. He is currently working on location in New England and in preproduction on a new show.