Oscar-nominated, Sundance and Cannes winning director/filmmaker Jessica Sanders talked to ProductionHUB about the challenges of breaking into the production industry and gave a behind-the-scenes look at her film, End of the Line, which premiered at Sundance earlier this year.
The short film, full of visual effects, is based on a short story by acclaimed writer Aimee Bender about a lonely man who goes to the pet store and buys a tiny man in a cage, exploring themes of power and its abuse, and is for Refinery29 and TNT's Anthology Shatterbox film series.
As an award-winning commercial director, Jessica has directed campaigns for Apple, Amazon, Samsung, Honda, Toyota, Procter & Gamble and more. She is currently directing Picking Cotton, a feature film based on the New York Times best-selling book by Jennifer Thompson, Ronald Cotton and Erin Torneo.
PH: When did the film industry first peak your interest and how did you know you wanted to get involved
Jessica Sanders: I grew up in a filmmaking family. Both my parents are accomplished documentary filmmakers (Freida Lee Mock and Terry Sanders), so I was exposed to the adventures of filmmaking very early on in my life. I love that filmmaking combines many of my interests — reading, traveling, collaborating, art, music, tech, fashion, design and that a film can make a positive impact in the world by creating empathy.
PH: How did you get your start?
Jessica Sanders: I studied Film and English at Wesleyan University in Connecticut. They have an outstanding film program lead by professor Jeanine Basinger. My first student thesis film “Los Angles” toured the festival circuit and won several awards. I started working as a production assistant on a few indie features, Hollywood films and a documentary series for NBC called “Crime and Punishment.” At this time I produced “Sing!” about the Los Angeles Children’s Choir that was nominated for an Academy Award for Best Documentary Short Film. I then directed and produced my first feature documentary “After Innocence” about wrongfully convicted people exonerated by DNA evidence after spending decades in prison. The film won the Sundance Special Jury Prize in 2005. I’ve been directing ever since!
PH: What was one of the most challenging things about breaking into the industry?
Jessica Sanders: Being a woman and person of color in Hollywood, we know that statistically hiring practices are very unequal. Last year only 6% of Hollywood features were directed by women. I try not to think about it too much in my journey but I’m definitely very aware of it.
PH: Let's talk about your recent film End of the Line. which premiered at Sundance. How did this project come about?
Jessica Sanders: I read the short story by Aimee Bender 13 years ago and have been passionate about making this film ever since. It’s not an easy film to make as it’s very ambitious as the entire film involves visual effects (we had 67 VFX shots) as one of the characters is a 2-inch man in a cage. A few years ago I met with Refinery29, they partnered with TNT to create Shatterbox Anthology to support female directors. They financed the film with several generous executive producers. It’s been a creative dream come true to finally make this film.
PH: What did the pre-production process look like?
Jessica Sanders: We had a lengthy, involved prep due to the ambitious Visual Effects approach. I storyboarded and photo-boarded the film and we designed a VFX approach with my VFX Supervisor Eva Flodstrom, Production Designer Justin Trask, Producer Louise Shore and DP Brett Pawlak. It was several months of prep, and a year and a half out I lightly prepped with my production designer to figure out building the 25ft cage and 30ft penis, as well as the VFX approach for the film. I’m very collaborative and was lucky to work with such an incredible team. 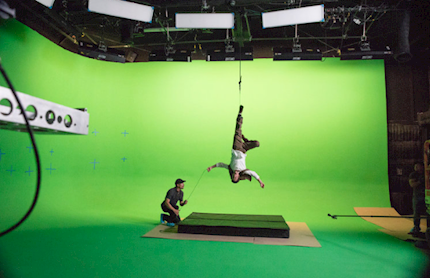 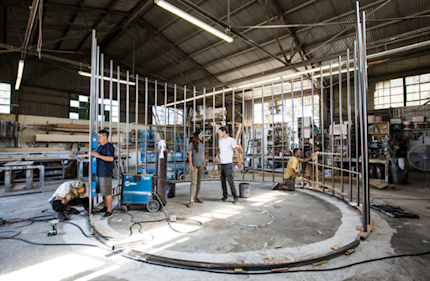 PH: How did you know the script was ready to shoot, and what is your process of getting it there?

Jessica Sanders: I had screenwriter Joanne Giger adapt the story several years ago. Once I got financing, we went through the script to trim any fat or unnecessary beats, since every moment counts with all the VFX. I also included notes from the actors specifically Simon Helberg who played Little Man. Because of the ambitious VFX and prep, the script had to be locked in advance of the pre-production process as we used my storyboards pretty faithfully, but of course, things changed a bit in the edit.

PH: Were there any challenges you faced while shooting? How did you overcome them?

Jessica Sanders: We had to shoot everything twice — so a big man in his world and then a little man on the green screen stage. Every shot where we put the little man in involved a big creative discussion so we tried to iron out the approach as much as possible in advance so as not to waste any precious time on set. It was very complicated but I loved the process and challenge. 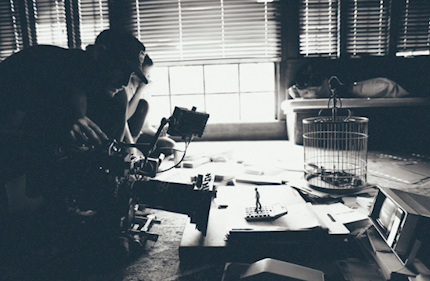 DP Brett Pawlak and Little Man
PH: What was your favorite part of working on this film?
Jessica Sanders: My favorite part of creating a film like this is to collaborate with amazing artists who elevate my vision. Costume designer Shirley Kurata brought insightful color blocking to the story, actors Brett Gelman and Simon Helberg brought so much emotion and nuance to the characters. Every creative teammate added to the magic, it was an inspiring experience! 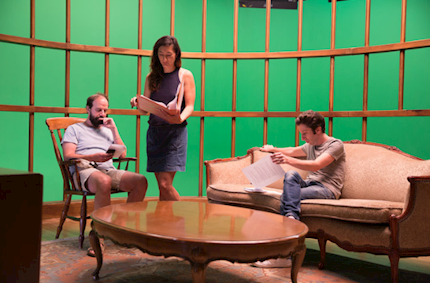 Brett Gelman, director Jessica Sanders and Simon Helberg
PH: What role have film festivals, like Sundance, played in your life so far?
Jessica Sanders: Sundance is an incredible platform for the film, we received a ton of press and the film has since played in 40+ festivals, won 2 international film awards and had a theatrical run in Los Angeles. It’s a joy to see the film with an audience which is why festivals are incredible for short films since they rarely play in theaters outside of festivals. 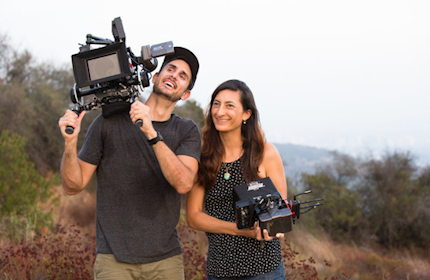 DP Brett Pawlak and director Jessica Sanders
PH: If there is one or more thing you think would make the film industry better, what would it be?
Jessica Sanders: Equal hiring practices; true diversity behind and in front of the camera.

PH: What advice would you give to someone who wanted to have a life creating film?

Jessica Sanders: Enjoy the process and journey. Be open. Learn the technology as much as possible so you don’t have to depend on others to tell a story. IE: Tangerine was shot on an iPhone!

Learn more about End of the Line.

You can also watch the film on Facebook and TNT.