Listen, we have all been there. Head down, eyes locked on the screen, hammering on a project, gotta hit that deadline, and now it is only a few days to the holidays. You, my friend, haven’t even thought once about the people on your list. Boy, are you Scrooged. Or are you? We humbly submit that it is not too late to find that perfect gift for those creative professionals in your life. Better yet maybe even find a gift for your self to put under the tree. Either way, you are bound to make out like a bandit. Check out our ProductionHUB list of hand-picked gifts that are sure to please the video production enthusiast in your life. 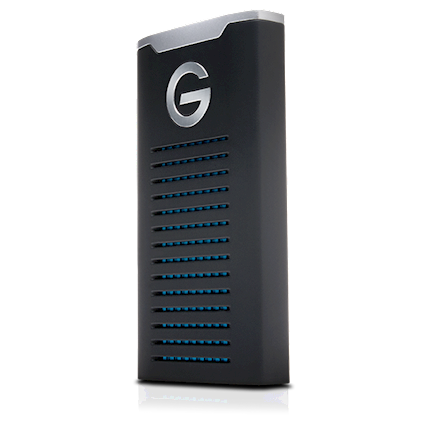 What better way to kick off our gift guide list this year than with the new G-Drive Mobile SSD-R from G-Technology? With up to 2TB drives available you should have plenty of room to store just a ton of stuff. The G-Drive Mobile SSD-R is just the right size to fit in the palm of your hand and built to withstand hard production days. If you have ever lost a storage device like a typical SD card or Micro SD card I don't have to say anything else. Here is some more good stuff:

Like I said, one can’t have too many backups. Especially for shoots you can never get to do over. 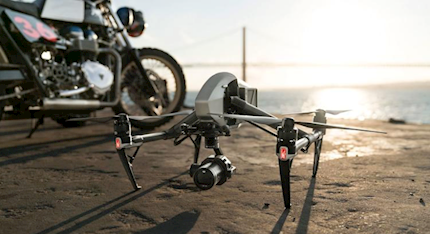 The new DJI Zenmuse X7 with a 35mm sensor and a full set of new carbon fiber lens designed specifically to work with the 35mm sensor. You can see it's incredible capabilities in this short film.

I have visions of my own beautiful fly overs in my head already, don’t you? So how did DJI do it? DJI engineered and built a drone and high end 35mm sensor that is integrated into and with the Inspire. So, anyone can pack it in and drone away you go.

The set of lens that are available from DJI (carbon fiber) match up weight wise and are balanced perfectly with the smaller drone size and yet still take advantage of the 35mm sensor. The Zenmuse X7 camera is priced at $2,699 USD. The 16 mm, 24 mm and 35 mm lenses will be available for $1,299 each, and the 50 mm for $1,199. Customers can purchase the Zenmuse X7 prime lens combo including all 4 lenses for $4,299. Please Santa, Please? 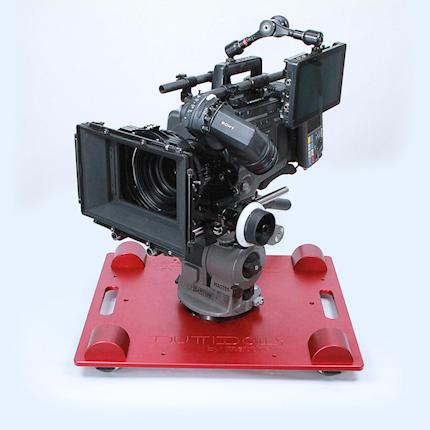 I think at some point almost everyone has to get “that” dolly shot. Well why not Matthews Dutti Dolly? Yes I know maybe some of you might not think of this as the sexiest of Christmas gifts, but hey — it might be just the right gift for you or the filmmaker in your life.

The Dutti Dolly is a simple but elegant design that is expanding the versatility of the common dolly shot. James Saldutti, a Dolly Grip known as ‘Dutti’ in the Hollywood community, began developing this dolly nearly 15 years ago. Since that time, the Dutti Dolly has been used on hundreds of feature films, television shows and commercials.

Through a partnership with Matthews, the Dutti Dolly is now commercially available. 2” in height while remaining stable whether riding directly on smooth surfaces, or on rails. Its 8 inline skate wheels and universal stand brackets allow it ride smoothly on speed rail or on tubing found in a local hardware store such as round, square, angle or PVC. It’s perfect for smaller or traveling productions where fast set-ups are required and equipment is limited. 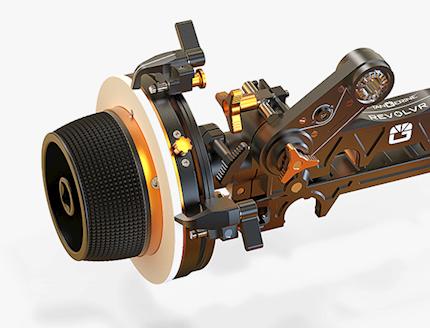 Revolvr Atom is smaller than the studio version, and has a dual mountable arm allowing you more space for other accessories. It comes with an Improved controller providing comfort at your fingertips. Additionally, The conical handle matches the contours of your hand, even when the camera is hard to reach. The removable hard stops move independently, and you can use one or both. One can also use the larger handle from the studio follow focus. 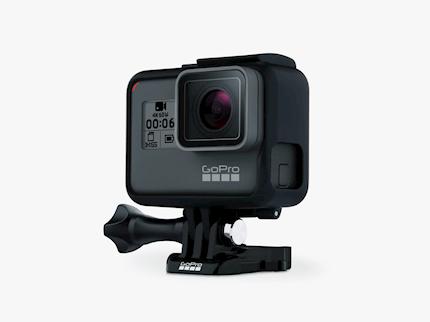 The Hero6 from GoPro is another absolute no brainer to add to your list. The ubiquitous GoPro Hero6 Black picks up where the Hero5 left off and then some. Pretty much idiot proof (I shoud know), the Hero 6 Black comes with an amazing 4K60 and 1080p240 video. HERO6 also has dramatically improved dynamic range and low-light performance to really make things pop, and an added digital zoom just to get crazy. Check out the laundry list of great features:

Developed from the ground up to maximize a GoPro’s capabilities, GP1 enables twice the video frame rates, improved image quality, dynamic range, low-light performance and dramatically improved video stabilization over previous HERO camera generations. Yes, I want the HERO6 Black too. Add it to your list. 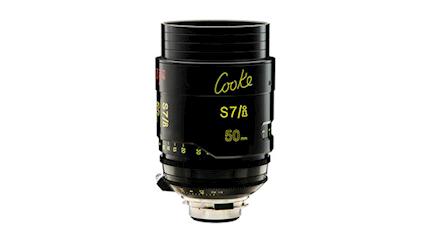 I just have to ask you one question. Who wouldn't want these lenses on your list? Yes I know not on the inexpensive side but, what's that saying? You get out what you put in?

Shoot 35mm, Super 35mm, Full Frame and beyond The Cooke S7/i, T2.0 Full Frame Plus Primes are designed to cover the full frame cinema camera sensors up to at least the full sensor area of the RED Weapon 8K (46.31mm image circle). Shoot 35mm / Super 35mm formats; full frame, and VistaVision and we have you covered with our S7/i Full Frame Plus lenses. And, the S7/i lenses come equipped with /i Technology for frame by frame digital information capture, as do all modern Cooke cine lenses for film and digital capture.

Showdown at Shinagawa: Tales of Filming from Bombay to Brazil by Bill Zarchy 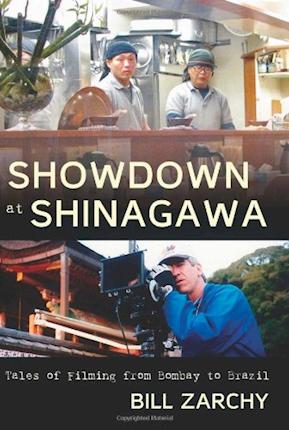 So, next on list is this fantastic book by famed cinematographer Bill Zarchy. The book, aptly named Showdown at Shinagawa: Tales of Filming from Bombay to Brazil, provides a rare insight into the world of international film and video production. For those who have traveled down this road there is a certain comfortable familiarity, for the new guys a real look at production life “on the road.” What a fun read!

Showdown features 18 tales (from Japan, India, China, Uganda, the Philippines, New Zealand, France, Singapore, England, Taiwan, Mexico and Brazil) and 21 pages of color photos, the rich experiences of a director of photography whose assignments have taken him to 30 countries and 40 states.

Zarchy brings us along for the ride on a darkly funny bus trip down the deadly Bombay-Pune Road in "Wrecks and Pissers," drags us through the disorienting milieu of Singapore's high-tech cleanrooms in "No Worry, Chicken Curry," faces a surreal Tokyo bowling-for-budget match in the title story "Showdown at Shinagawa," and shares the challenge of filming former President Clinton while dealing with family tragedy in "Dog Years." And so on, across six continents, over three decades of his work.

Sometimes Zarchy deals with famous people (Clinton, the late Steve Jobs, and Morgan Freeman), more often with ordinary folks. Despite the numbing jetlag, cultural disorientation, frustration with clients, and unpredictable weather that are an inevitable part of international film shoots, Zarchy maintains his sense of humor and the ridiculous, and a strong belief in the warmth of people all over the world.

Now if money were no object...

Because if you never ask you’ll never get, right? So, I was able to collaborate my good friend and fellow shooter/director/editor/etc. Curtis Pair and talk to him for a few about things that would make the holidays really shine bright. After some back n’ forth we agreed to add these gems into the mix. The holidays are all about sharing aren’t they? Check these bad boys out, they are tasty treats for sure. 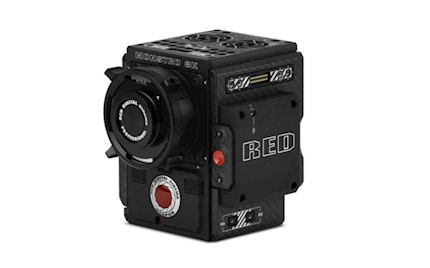 This year for Santa’s wish list, I’m asking for a RED Weapon Vista Vision! From all the tests out there, the “VV” is actually ‘cleaner’ in the blacks and allows the operator to shoot in even lower light conditions than any of the other RED Digital Cinema cameras!

You can record on-board 8K R3d, (RED RAW files) and/or “proxies” in either 4K/2K/1080 in the ProRes or Avid DNxHR/HD Quicktime formats, so really this camera should cover just about ANY event you could ever shoot. It comes standard with the new “IPP2” color science system, and is available to use in camera! If you’ve not seen that, do yourself a favor and check it out! Now the user has so many controls on how the highlights roll off, contrast, etc. It really does make the RED Digital Camera ecosystem shine. The images IPP2 produce are simply breath taking. 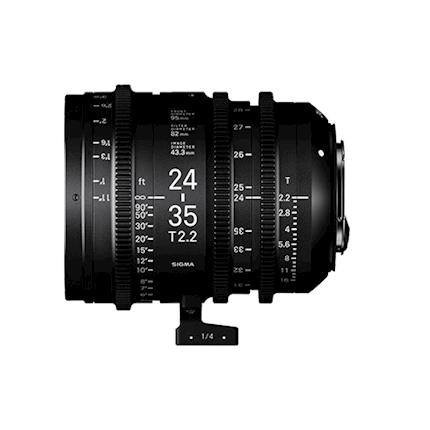 Of course Santa will have to accompany the Vista Vision with glass! Sigma has “full frame” cinema primes that cover the VV sensor. Even their gorgeous 14mm has very little vignetting, and it’s just in the corners. Most might not even notice it. If you shoot in 8K wide screen or 8k 16:9 modes, it eliminates the vignetting altogether!

The price for the Sigmas is very appealing too — it won’t break Santa’s Bank! If Santa is saying the Sigmas are just too much on the request list, check out the Zeiss Otus line. You won’t be disappointed with these beauties. They only have three lenses, and you can get the entire set for under $10K. I like how Curtis just went all in with his wish list. I think I want all of that stuff too! Thanks for sharing Curtis.

So don’t panic quite yet. There is still a little bit of time to get those special gifts! Be sure to head over and browse our site for more gift ideas. Enjoy the holidays and here is to a healthy and prosperous 2018 to all.

Mark Foley is an award winning producer/director and the Technology Editor for ProductionHUB. He is hopeful that Santa is really good to all production professionals everywhere!