Sony Vegas Pro 13 is a Non Linear Editing system from the folks at Sony Creative Software akin to other professional mainstream NLEs from Avid, Adobe, and Apple.

Like those other NLE's, Vegas Pro 13 has all of the day to day essentials required by a modern editor including, a timeline, media bins, a viewport for the selected clip, as well as a viewport for the timeline. Additionally - all of the tools in terms of making selections and trimming are where you'd expect.

Since I come from a career of mainly editing documentaries - one of the things I've come across lots of is mixed formats of footage. RED, 5D mark II, GoPro, P2, XAVC, and files transcoded in ProRes. I'm glad to report that all of these formats work easily in Vegas Pro 13 - and it is as simple as drag and drop. Additionally you can mix and match all these types of footage in the same timeline without issue. 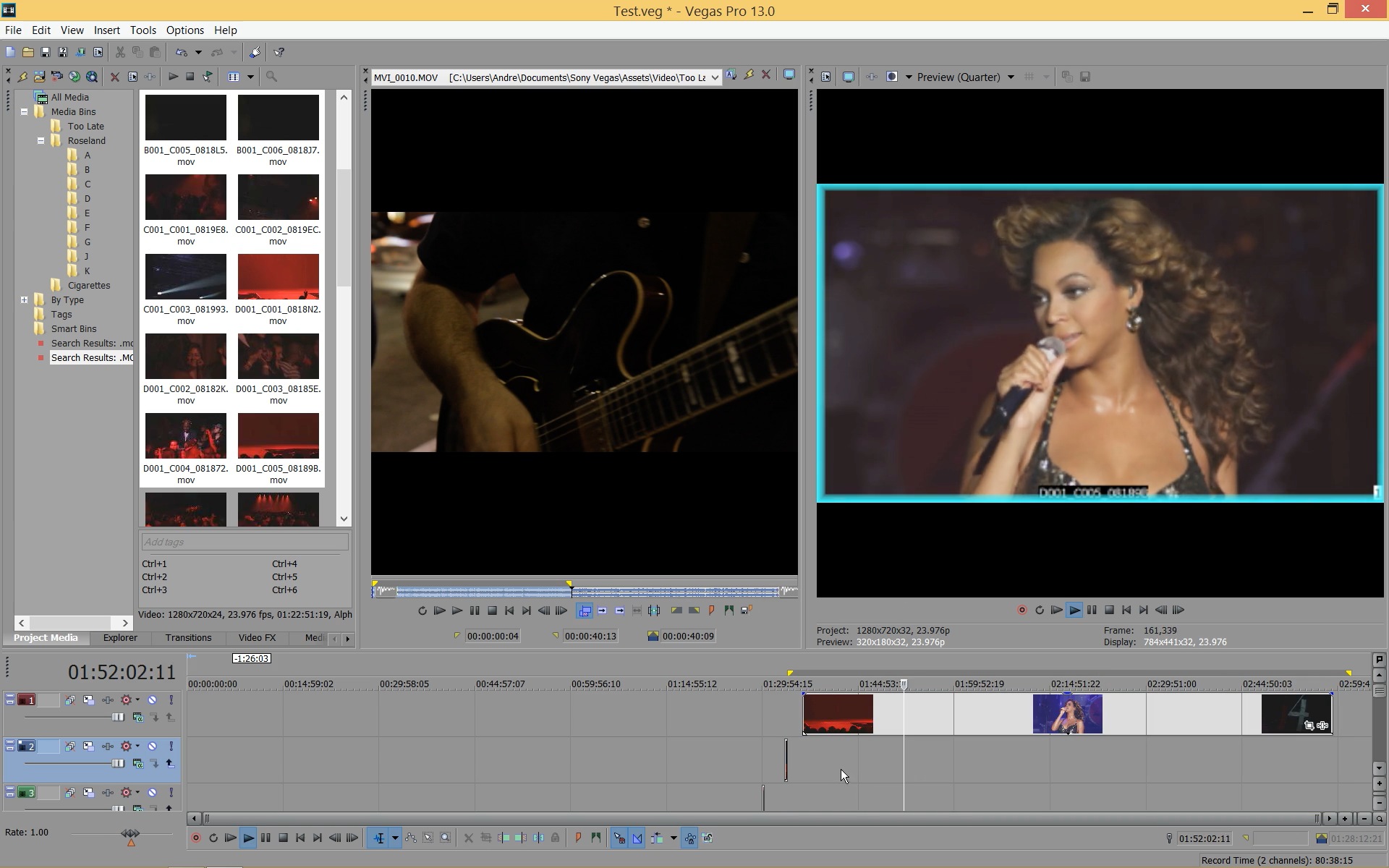 Keeping in the theme of interchange - Sony Vegas Pro 13 supports a wide array of project formats to import and export. Among them - Adobe Premiere project files can be imported, as well as XML's from Final Cut 10 as well as 7, Avid, etc. To test this, I imported both a music video I edited in Premiere Pro CS6, as well as a doc edited in Final Cut Pro 7. I am glad to report that in both instances - Vegas Pro imported the timelines perfectly, replicating every cut and transition.

One concern with any modern day editor is that of performance. GPU acceleration is a big deal when playing back multiple streams of footage in real-time and the team at Sony has done lots of work to keep up with their peers. With OpenCL acceleration working under the hood, Sony Vegas Pro runs extremely quickly and hasn't once lagged or choked on a piece of footage. Multi-clip timelines streaming both H.264 and R3D held up without issue, a mandatory requirement for any full-time editor.

One feature that I wasn't able to test unfortunately is that of Stereoscopic editing. Sony Vegas supports native stereo 3D editing within the application itself, without the need for additional plugins or round-tripping with other software. A big plus for those people working in 3D. 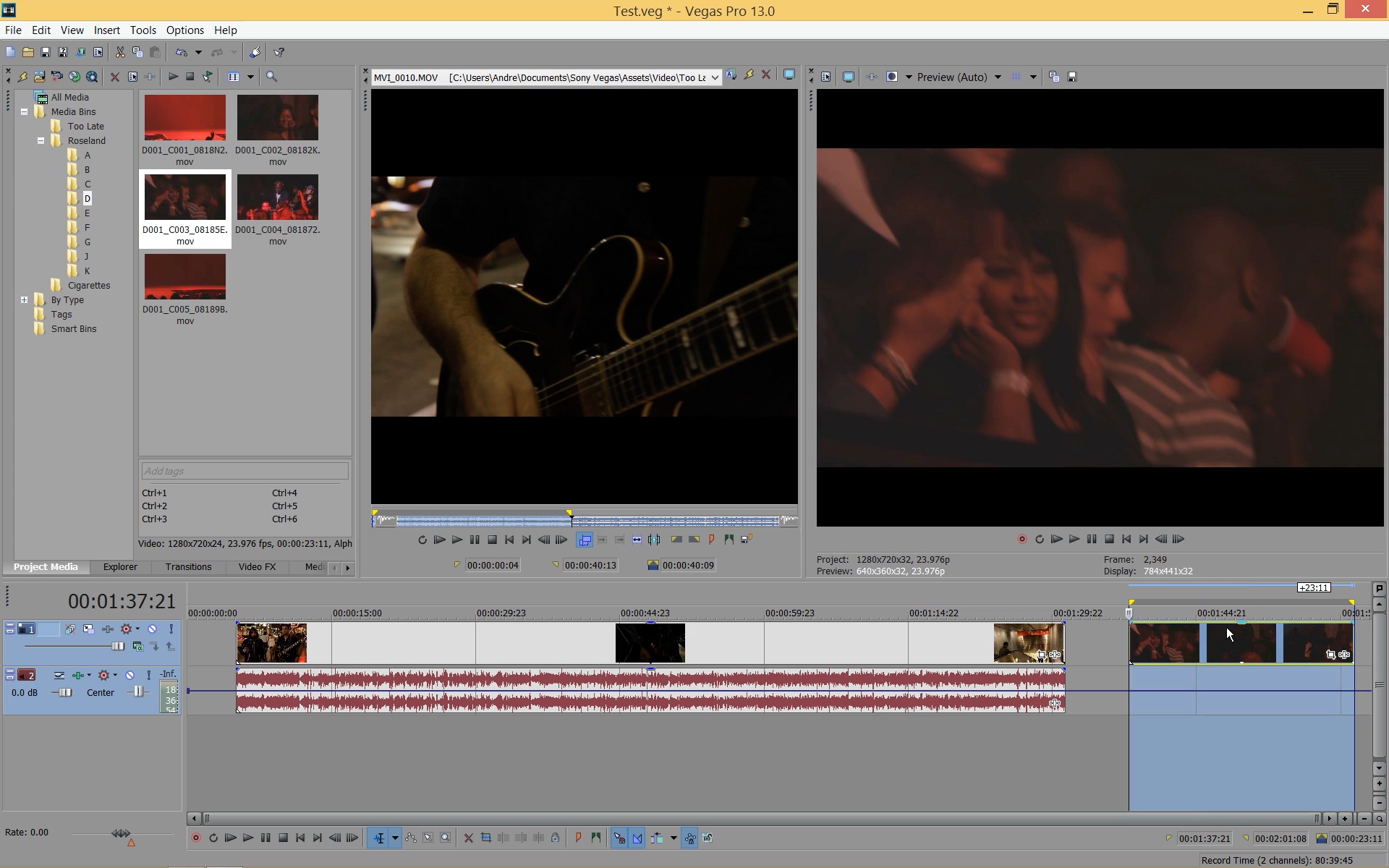 Another area that Sony has editors covered is the support for the OpenFX standard. Sony has included lots of built-in effects, and filters in Vegas Pro 13 - but OpenFX allows you to expand that collection to other industry standard plugins that you may already have in your collection. Additionally - many of the built in plugins such as colour matching, FX and shape masking are hardware accelerated to give you maximum performance. Among the built in effects are Video Essentials 6 from NewBlueFX which features 100 presets and 10 plugins, as well as Izotope Nectar Elements for fixing audio in one click.

For any editor coming from another system I would strongly suggest customizing both the interface and key binds to what they are used to - in order to aid in a smooth transition. Default key binds and behaviours in Vegas Pro 13 make it slightly difficult to hit the ground running, however taking a couple of hours to follow the built in help guides and tutorials, as well as customizing the key binds to match another system that you're familiar with will help unleash the considerable power built into this NLE.

At $600 Sony Creative Software has packed a lot of value into one piece of software. Between the behind the scenes performance, support for virtually every file format, and loads of useful effects out of the box - you can't go wrong. When so many of the big players are touting subscription models for their software where the user is essentially renting the license - it is great to see a powerful, professional tool available for such a reasonable price. 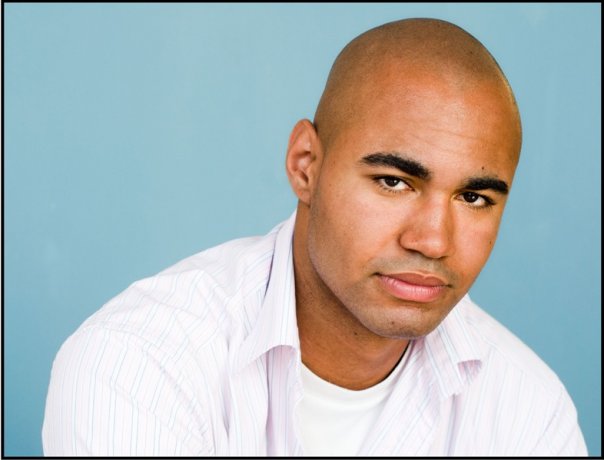 Andre Elijah is an editor and post-production consultant that specializes in the world of RED and 4K. Having worked on productions all over the world with clients ranging from Sony to Radio & Television Hong Kong to Beyonce - Andre has a wealth of knowledge, and practical experience in the 4K space. Currently Andre is in charge of producing content for AOTG.com - the world's largest online community for post-production.
@AndreElijah