You take the plunge and the cool quiet mumbling of life below edges out the background hum of the world above. Everything beyond the surface takes a distant place in your ears, and if you’re lucky, in your mind, too.

And there you are: with just the turtles and the coral and the bubbles from your air tank. If you’re Matt Schultz and Andrew Ackerman, you might also have your camera, its waterproof housing unit, and a tripod. I talked to these two pros of underwater cinematography--veterans of the award-winning documentary Chasing Coral--about what their time below water teaches about business and life above it. Much like life, filming underwater is a balancing act between control and letting go, rigorous preparation and rugged flexibility, humility and confidence. 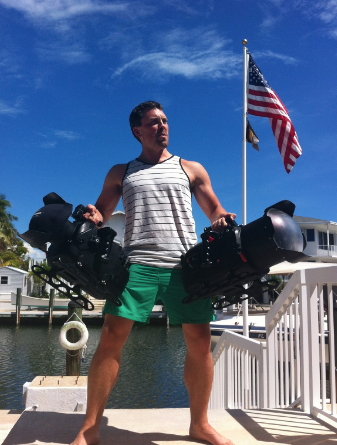 Andrew Ackerman plus two underwater camera housings, one American flag, and the hope of a nation on his shoulders

6 lessons for life and business from underwater cinematographers

Lesson 1: Put yourself in position to get lucky

“The way I think about wildlife photography,” said Ackerman, “is you have to put yourself in position to get lucky.”

You can control very little. What you can do is be in the right place “over and over with the best local knowledge and the best intentions.” That way, when the epic shot presents itself, you’re ready to capture it. And if it never does, well at least it’s not because you weren’t ready.

The same approach goes for life. At first blush, Ackerman’s role in Chasing Coral seems serendipitous. A chance conversation that led to a key relationship that led to a proposition from the film’s director. But if you dig a little deeper, you can see that without learning to dive with his dad at age 12, buying underwater gear as an expensive gamble, and taking up the hobby of filming underwater, Ackerman never would’ve been in position to have the conversation, let alone to say yes.

Lesson 2: Slow is smooth and smooth is fast

This diving wisdom illustrates how much of filming, like diving, is counterintuitive. When you desperately want a shot or a vulnerable moment from your subject, you’re less likely to get it. Chase that turtle and she’ll make sure you lose her. But slow down and respect that you’re a guest in her home and she just might let you in on something magical. Every frenzied breath you take underwater takes air from your tank and therefore, time away from your dive. You don’t get the shot you want by pursuing the shot. You get the shot you want by being present and patient.

Whether it’s with your diving buddy, a turtle, or a life/business partner, Ackerman noted that “trust isn’t transactional.”

Lesson 3: Fear is the enemy

Ackerman said, with one exception, every predator he’s encountered in the wild is less dangerous than its reputation. Frequent divers inevitably cross paths with sharks and they’re mostly disinterested in their underwater guests. They’re just doing their thing. But if you panic, you’re going to draw their attention. And then it might get dangerous. So the real enemy is not the shark, it’s the fear. Underwater, as in life, if the experts aren’t worried, you don’t need to be either.

The exception? Polar bears. Just stay away from them because they have no problem messing you up.

Literally. Coral is vital to the health of the ocean’s ecosystem. Asexual reproduction (breaking a piece of coral into tiny pieces and letting each fragment grow as a clone) is one way of replenishing the dying coral reef. It’s simple, fast, and dramatic but the way that best contributes to the coral’s health and vitality is sexual reproduction. Such “robust DNA” Ackerman noted is “the way through “blights, impurities, and pestilence.” It’s slower but healthier, too.

Similarly, a business/mindset that allows you to adapt to changing circumstances positions you to adjust your offerings and pivot when unexpected challenges (like COVID-19) arise. Knowing how to tell a story serves you well in any medium.

If underwater cinematography were their only offering, Schultz and Ackerman’s livelihood would’ve been hit much harder by the current pandemic. So yes, by all means, develop your speciality. Just be ready to adjust as the demands do.

Lesson 5: Know when to put the camera down

During an encounter with dolphins, the Schultz/Ackerman duo got some great shots and then dropped their gear in the boat and returned to the water to play. Turns out, beyond what Schultz noted as their “speed, power, grace and agility,” the creatures are also just plain fun. Ackerman noted “I’ve only had that [sense of play] with my dog, sea lions in the Galapagos and with the dolphins. That’s a special feeling.”

What does play look like with these ocean mammals? “Maybe it’s anthropomorphizing,” Ackerman said, “but we saw all the signs that we’ve come to consider affection and playfulness. If they were distracted, I would swim as fast as I could and before I knew it, there’d be one right next to me. If I did a front flip, they’d twist, too.”

Schultz agreed that there was a point to say, “Let’s experience this moment without a camera between us and this animal” because it’s “what we’ll remember more than the shot.”

If you’re too preoccupied in the pursuit of movie magic, you just might miss the real magic. 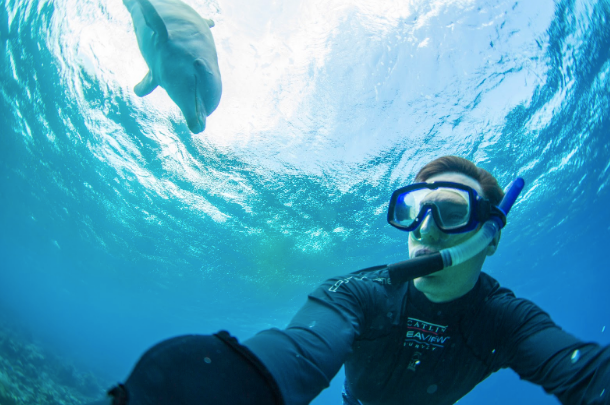 Matt Schultz and a buddy swimming in Curacao

When filming underwater, you seek control--control of your breath, your shot, your movement. But sometimes, the best form of control is letting go. Letting go of your plan, your ego, your idea.

Schultz said, “Both diving and filmmaking are such equipment-intensive activities that the discipline and protocol you learn around diving makes you a better filmmaker. You’re more intentional about redundancy and gear checks and having a bailout plan if something doesn’t work.”

There are no gear bags underwater. You bring your camera, one lens, and maybe a tripod. “It makes you more critical for how you plan in unknowns and mitigate risk,” said Schultz. It forces you to be innovative, judicious, and creative with what you have. Prepare as well as you can but be willing to adjust once you’re in the thick of it.

If you’re thinking about getting into underwater photography/cinematography, know this: The first skill you need is just to function well underwater. You can’t get a great shot if you can’t breathe or control your movement. From there, grab a GoPro and play around. Like life, the best camera is the one you have.

Whether you’re searching for an underwater cinematographer or an entire video production crew, you can be sure you’ll find a highly-vetted option from our online database. And for those looking for work in production or post-production, you can apply to be a part of our database here.

Andrew is a documentary film Director, Cinematographer, and Producer and has filmed sharks, bears, and cage-fighters in his quest to study the more dangerous, yet misunderstood, creatures on the planet. He is a perpetual student (except for the things he is REALLY good at) and firmly believes in not taking himself too seriously. He has been told he balances professionalism and levity perfectly, and that he is a joy to be around on and off set. He may be a bit of a narcissist. 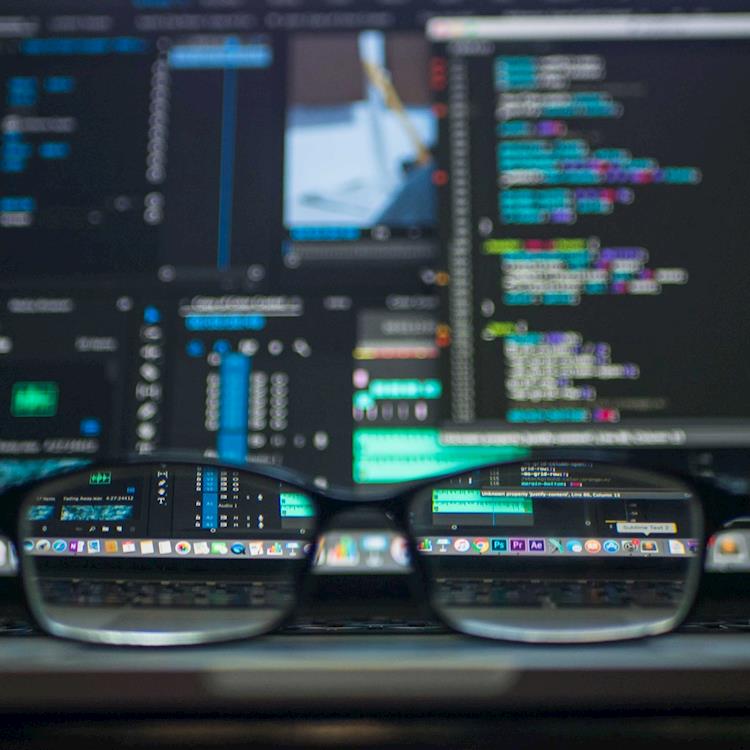 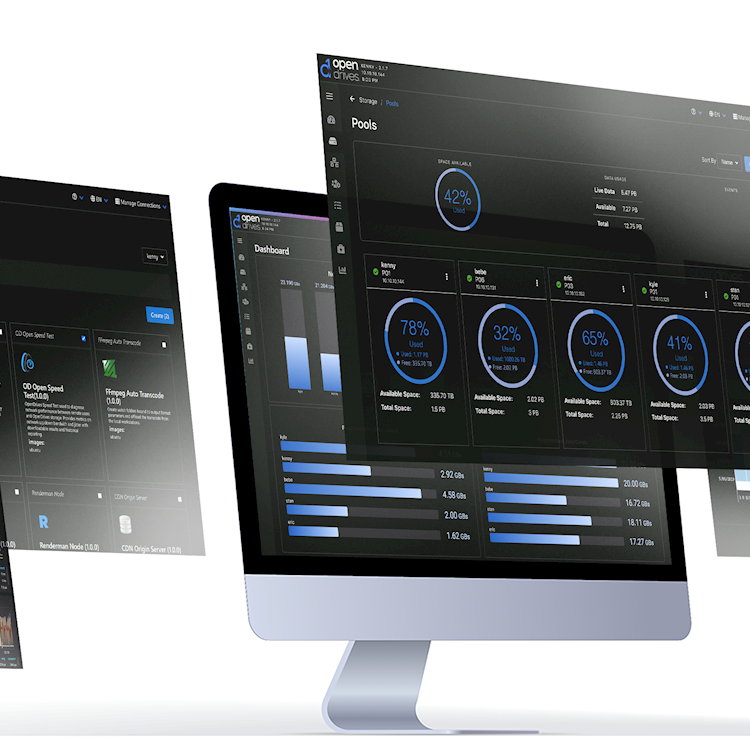 Women in Film: 3 ladies behind lenses chat representation, balance and hard-earned lessons learned
Become a Contributor
Recent Blog Posts
Remote Truck Production: Are We There Yet? How animation can help video producers thrive in the COVID-19 era Part 1: Tips for Working with a Remote Editor Editor Todd Downing Tells the Story of the Feminist Movement in the FX Limited Series, Mrs. America In Review: LitraStudio Wireless 10M Waterproof MIL-STD810G
Become a Contributor