John Barber, president and owner of SpeedPro Norcross, explains that he was referred to Mike Frey of St. Louis-based Momentum Worldwide “as the only guy in Atlanta who could pull this off” because of his reputation on other quick turnaround large-format projects. Barber, who was recently named Franchisee of the Year by the International Franchise Association, previously ran a $1.5 billion division of PepsiCo and understood the imaging needs of Coca-Cola, whose Sprite Zero Sugar brand collaborated with Marvel Studios on the initial bus wrap designs.

With SpeedPro responsible for wrapping ten buses, five in Atlanta and five in Raleigh, Barber went to see the buses early on and immediately discovered a challenge: they were different models in each city. This required the designs to fit both types of buses perfectly. The original concept from Marvel and Coke featured iconic mid-body shots of the film’s stars: Letitia Wright (who plays the lead character Shuri) in tribal warrior garb, and Danai Gurira (who plays Okoye), in a purple tunic with arms crossed. The Sprite Zero Sugar logo is prominent nearby, with the background utilizing the earthy green from the logo field.

The first version of the design, Barber recalls, did not accommodate the location of windows, doors and ventilation grates on the buses. In addition to adjusting for these, he recommended scaling back a more comprehensive design to key sections on the side, front and back given the short timeframe of the project. Including the approval process by Marvel and Coke, SpeedPro had only two days – 48 hours from Tuesday through Wednesday – to have the ten buses ready to roll Thursday. They would be seen by thousands of people as they came into urban Atlanta and Raleigh neighborhoods to pick up students, drive to the theaters, and return again.

With the anticipated approval/print/install time crunch, SpeedPro turned to technology as a solution. “I wrap about 850 vehicles each year – cars, vans, trucks, buses – using traditional HP latex printing, but with a two-day window to get this done, I decided to try something new,” said John Barber. In 2020 he had invested $400,000 in a 3.2-meter LED hybrid printer from digital print manufacturer EFI, designed for high-volume, production-level projects. One advantage: it took one-fifth of the time to print compared to traditional large-scale machines.

The “Wakanda Forever” bus project required 7,800 square feet of vinyl material. For the new machine, John Barber needed to order a special UV laminate while abroad on a business trip in Los Cabos, Mexico. “It came in three days before we went to print!” he said, nervously laughing about the cross-country trip required, not to mention that this would be the very first UV vehicle wrap SpeedPro Norcross would do on its new EFI printer.

All of the planning paid off. The final art was approved, the UV vinyl and laminate printed flawlessly and with brilliant color, and John Barber oversaw installation in Atlanta while a trusted colleague, Ward Martin, owner of SpeedPro Raleigh, was brought in to oversee the five buses there. Several hundred students in two Southern cities got to feel like celebrities being transported to the debut of the new “Black Panther,” and Marvel Studios and Coca-Cola/Sprite Zero Sugar were recognized for the initiative.

“SpeedPro of Norcross was a fantastic partner to work with on the Sprite Zero/Wakanda Forever project,” shared Mike Frey, Director of Experiential Production for Momentum Worldwide. “They delivered a quality product, and they did so in a timely and professional manner. I look forward to working with them again in the near future.”

“We were ecstatic we pulled it off,” said John Barber of SpeedPro Norcross, who appropriately also came out looking like a superhero. 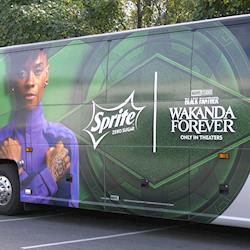 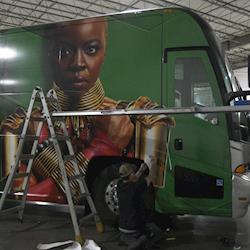 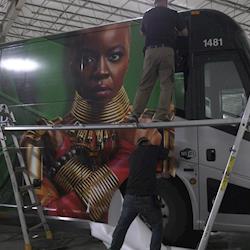 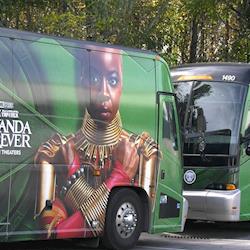