Marcella is a professionally-trained makeup artist with 20 years experience and specifically educated on makeup for television and film, as well as on-set etiquette. Based in Orlando and Tampa, she travels within and out of state for television, commercials, video, corporate, celebrity and print work. She began her specialized training in 1995 in Madrid, Spain, and 1997 in Orlando, FL.

She captures concepts and takes direction well, and can adapt application to suit what is needed, especially working with HD and RED cameras. With a light-handed touch, she achieves flawless makeup application for a naturally soft and beautiful end product. With a keen eye for detail, clients often comment how fantastic talent looks in front of the camera. Her skill, dedication and organization allow her to successfully work in fast paced environments.

She is professional, punctual, intuitive, and drama-free, getting along with everyone she works with, and is discreet (quiet) on set.

For any television, commercial, video, corporate or print project, call Marcella at: 310-428-5893 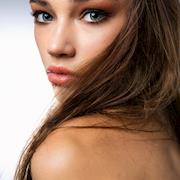 Marcella has provided my team amazing service and impressive results on several productions we've created in Orlando. She is extremely professional, flexible and calm under pressure and my talent always feels taken care of and supported by her efforts. Marcella has been amazing to work with and we are lucky to have her as part of our go-to team in Orlando!

Marcella is very talented, professional, and never late. I have used her on dozens of videos, perfect every time. She also knows how to handle very VIP clients. She is quiet on set and so professional. Everyone loves Marcella!

We came into town looking for a professional makeup artist and Marcella fit the bill perfectly. She was on time and made the talent feel very comfortable. The next time we're in the area Marcella will for sure get another call from us.