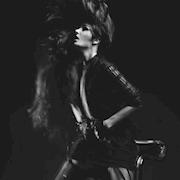 This is a variety of photos I've done to give you an example of different styles I can conjure..I found it's important to be fully present in still photos as much as motion pictures.