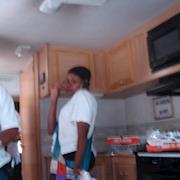 Back in the Day Set photos

I rarely take photos on set unless I need them. I clear all my pictures before I show them, because they are not my property. Enjoy, Nick