Arianne has been a Master Makeup artist and licensed esthetician/manicurist for 18 years. Originally from Denver, Co. she left at age 24 to pursue her career and dreams in Los Angeles, Ca. where she spent 14 years working in the film, television and fashion industry. She recently moved to the PNW a couple of years ago to get out of the smog and settle into the more peaceful quality of life offered by Tacoma and its surrounding communities. She’s worked for MAC Cosmetics as well as a local salon before she decided to start her own small business called Aesthetics by Arianne, LLC. She runs a cozy beauty studio out of her home in Tacoma’s beautiful North End neighborhood. She provides Microblading (permanent brows), Eyelash extensions, Manicure, Pedicure and Nail Enhancements (full sets) as well as, Waxing and of course Makeup application services.

Known for movies such as, The Metrosexual, No Mans Land: Rise of the Reeker and The Red Canvas, and also television shows such as, The Janice Dickinson Modeling Agency, Sunset Tan, Celebrity Rehab and many more, 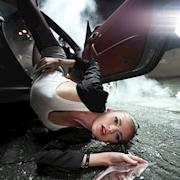