Gabriel DiMarco, Cellist and Composer for Film and Television

I feel it is my purpose to contribute, however large or small, something meaningful to this world through the creation of music. Music emanates something so profound and intangible; and when fused with purposeful storytelling, can create such an impactful and beautiful experience.

I want to help tell stories that are meaningful and carry a revitalizing message and I am eager to collaborate with filmmakers who are looking to make their stories memorable and compelling!

BIOGRAPHY
Gabriel DiMarco is a classically trained composer and cellist from Washington D.C., currently residing in Los Angeles, CA. His unique voice as a film composer is characterized by the expressive and innovative use of the cello which he performs himself. He can be heard on his recent feature film, Children of the Mountain, which was awarded an official selection for the 2016 Tribeca Film Festival in New York and later received Best Score at the 2016 Ghana Movie Awards. Gabriel also scored the Smithsonian National Air and Space Museum Lifetime Achievement Trophy Award docufilm which was screened at the Smithsonian museum IMAX theater in Washington D.C.. His recent collaboration with award-winning director, Juan Martinez Vera on the film, Spark, earned an official selection at the LA Shorts Fest and was a finalist at the British Academy of Film and Television Arts (BAFTA) US Student Film Awards. Some of Gabriel’s other notable work includes Herblock’s Editorial Cartoon Exhibitions DVD where his music eloquently depicts the character of the major political topics of the 20th Century, including Education, Civil Rights, the Presidency, Environment, and Democracy through the lens of famous political cartoonist, Herbert Block.

Gabriel has played with numerous orchestras including the Georgetown Symphony Orchestra and the Londontowne Symphony Orchestra, where he played as principal cellist. He has also been a member of the St. Charles String Quartet in Washington D.C.. In Los Angeles, Gabriel plays as a session cellist where he can be heard on films such as 10 Cloverfield Lane (Paramount Pictures), ID2: Shadwell Army (Universal Pictures) and performed as a featured musician on Colossal (starring Anne Hathaway). He can also be heard as a solo cellist on AMC's The Walking Dead and STARZ's Black Sails.

Gabriel holds a Bachelor of Music degree in Cello Performance and Music Composition from The Catholic University of America, Benjamin T. Rome School of Music in Washington D.C.. Gabriel bolstered his film composition career as a graduate of the prestigious Scoring for Motion Pictures and Television program at the University of Southern California (USC). At USC he studied with renowned composers, among which included Bruce Broughton (Tombstone) and Christopher Young (Spider Man-3).

We have been in the industry since 2007. 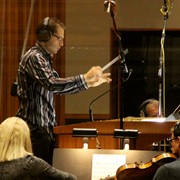 Work with Gabriel DiMarco, Cellist and Composer for Film and Television

Work with Gabriel DiMarco, Cellist and Composer for Film and Television