Abyssmal Entertainment is a multi-media company founded in 2002 by Steven Shea, with the aspirations of making an impact on the independent film market.


Our first feature film, Biblical thriller,The Night Owl, was distributed globally in the Summer of 2005 through Brain Damage Films. We went on to co-produce the zany slasher/comedy Andre The Butcher, which was distributed nationally in the Spring of 2006 through ThinkFilm. Our third feature film, horror/comedyHoodoo For Voodoo, was lensed in Louisiana just before Hurricane Katrina hit, and was one of the last films shot in the area before the devastation. It was distributed in Fall of 2008. In 2009, we completed the internationally award-winning short film 2:22, which went on a wild film festival run, including the Sitges International Film Festival, Screamfest Horror Film Festival, and the Cannes Film Festival. In winter of 2013, action/horror Doomsday County was released through Troma Entertainment. 2014 brought two horror thrillers that we partnered up for: camping thriller Deadly Weekend, released through TomCat Films and rocking horror Rockabilly Zombie Weekend released through Green Apple Entertainment.

Abyssmal Entertainment has completed many short films, commercials, industrials, music videos, and many other multimedia projects. Currently, there are many new projects in the works ranging from film to internet to television. Here at Abyssmal, the spiral goes up.

We have been in the industry since 2002. 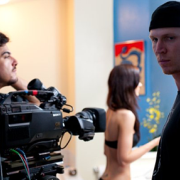