Ricky has carried his spirit and aspiration with him ever since he was a petit boy, marching around the room with toy trumpet in hand, blowing intently to dazzle his audience, consisting solely of family members. And although the trumpet took an early retirement to make room for other talents, such as tap, crooning, confabulating, posing and showing off, he has been a more than worthy entertainer ever since.
Originally, Ricky made his way from the backdrop of the Delmarva Peninsula, USA. Ricky started performing at a very early age with vigor and discipline, which in turn ushered him through North America, Europe, Asia and Africa.
He has been in scores of musicals and plays such as “A Funny Thing Happened On The Way to the Forum” where he made his comic debut performing in German as Pseudolus as well as “The Mountaintop”, where he had the honor of portraying the great Dr. Martin Luther King, Jr. and the musical endeavor, “The Fight of the Century”, in which he portrayed American heavyweight boxing champion legend Joe Louis. The production was later honored at the esteemed Berlin Theater Club. And for the funk, fun and pop of it all, Ricky sang in the project “Universal Suspects” creating the video for his song Arm Aber Sexy.
Ricky’s love of tap and dance led him to train and perform with the likes of Kurt Albert, Pam Meagher, Judy Simone, Sam Weber and Ricky’s mentor, Brenda Bufalino. Later on, he would not only form the tap duo “Zapateo” with Mona Fischer, but also create original choreography, and produce and direct his tap dance show, “We Can’t Walk”.
His sonorously deep rich voice has contributed to countless documentaries, children books, audio plays and television series. He has moderated the Bayer Schering Pharmaceutical Benefit Global Launch Meeting in Athens, Greece.
Ricky’s cinematic debut transpired in the film Joe & Max after which numerous roles soon followed, including Duke Thompson in the award-winning, gun-slinging western cult classic Snowblind and most recently Busker Ben in the feature film, Music, War & Love, directed by North American, award-winning Martha Coolidge. 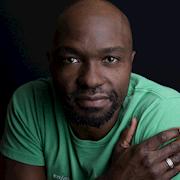