A 40+ year veteran of the television production industry working in production and postproduction from network to local production houses in the Baltimore and Washington, DC area. Knowledgeable in all areas.

We have been in the industry since 1981. 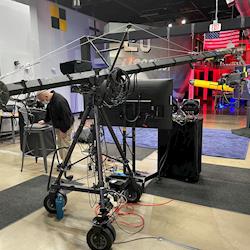 George is the consummate professional. Pleasant, punctual, and able to troubleshoot an problem. His jib shots have duded luster to a number of our productions.

George Bolden - you can say all the usual things about his work. He's a consummate professional, he's timely, he's creative, he's got vision, he get it! etc., etc., but what I have to say is a lot more simple. This guy is pure magic. He arrives where you want to be 5 exits before you begin to try and articulate your vision. George Bolden is an industry magician, able to edit, operate the jib and much more with quiet efficiency and an ever ready smile and great sense of humor. I will continue to work with George on every independent project I have! Happy to recommend a true professional who knows his stuff and has a pleasant bedside manner. George Bolden, is the complete package!

I have used and will use George in the future. Great tech knowlege. Greaty product

George is a true professional! The job he did in producing our 40th anniversary video is not only a preservation of our company history but a keepsake for all our employees and customers. Kudos George for a job well done! I would recommend this gentleman for any of your broadcast/video needs.