Valerie Saunders has had a stellar career in show business for 25 years. Her repertoire is quite extensive:
1. Show Tunes 2. Big Band 3. Country 4. Western 5. Sing A-long 6. Classical. A professional singer, comedienne, actress, dancer, and choreographer, she has performed nationwide as well in Arizona, New York,
Ohio, Texas, Virginia, and West Virginia.

She sang on board the Seabourn Cruise Line. Her international performances include the Hotel Splendido in Portofino, Italy, and a bistro in Paris, France.

In November 2009, Valerie played Judy Garland in From Gumm to Garland: Judy The Musical, in Mesa AZ. Other major roles, all of which happen to be in Phoenix, include Molly Brown in The Unsinkable Molly Brown in 1987, Nancy in Oliver in 1991, Ado Annie in Oklahoma in 1992, and Reno Sweeney in Anything Goes in 2005.

In 2003, she was directed and choreographed in two productions by Dee Dee Wood , the choreographer of the films Mary Poppins, The Sound of Music, and Chitty Chitty Bang Bang. She was truly honored because her greatest love since childhood has always been movie musicals - and still is. Valerie performed in Sweet & Hot, a Harold Arlen Revue, in 2003, and in Hot & Cole, a Cole Porter revue, in 2007, both in Carefree, AZ.

Valerie honed her skills in improvisation back in 1991-92 at the original Rawhide in Scottsdale, AZ. She first learned about and then performed “Streetmosphere,” strolling through Main Street as Matilda, a character she created and developed there. She performed in comedies every hour and also did an authentic Vaudeville show.

Valerie’s determination led her to audition to sing the National Anthem for the Phoenix Suns. To her delight, she performed the Star Spangled Banner at a playoff game in 1992. She then sang it for the Phoenix Coyotes in 1999. Her largest audience ever, 50,000, was singing at an Arizona Diamondbacks game in 2000.

In 1993 she played Sapphire Sue at Old Tucson Studios. One day that spring the piano player was out sick. Because the house was packed she was asked to go on live and alone. With no time to prepare, she sang a cappella and performed improvisation for all 4 scheduled shows. That summer she was also asked to work in the props department for the film Tombstone.

In the summer of 1994, her improvisational one-woman show dressed as Annie Oakley was the opening act at the Stagecoach Amphitheater in Geauga Lake, an Amusement Park in Aurora, OH. As a vocalist, her greatest thrills came with the Cleveland Orchestra and Chorus when she sang 2nd alto in Mahler’s 8th Symphony of 1,000 not only
at Severance Hall in Cleveland, OH, but also at Carnegie Hall in New York City, NY, in 1995, considered to be the greatest theater in the world.

Another singing opportunity filling her with joy was as a big band vocalist with The Sentimental Journey Orchestra. She performed throughout Texas in 1997, 1998, and again in 2001. She belted out several tunes, including Rock-A-Bye Your Baby and I’ve Heard That Song Before. One of many ballads she crooned was Over The Rainbow.

A vocal impressionist for many years, she emulates Judy Garland, Julie Andrews, Patsy Cline, Barbra Streisand, Doris Day, and Patti Page. Since childhood she has been doing scenes from The Wizard Of Oz.

Valerie was a strolling singer in 1997-98 at the original Romano’s Macaroni Grill founded in San Antonio, TX.
This afforded her the opportunity to demonstrate her “voices.” When her career led her back to Phoenix in 1998,
she continued performing tableside at three Phoenix locations through 2001. She soon realized the majority of
the patrons requested Patsy Cline year after year.

She was once told by a patron her niche was being a comical singer. She decided to take this to heart.

Playing poker with the guys. I win 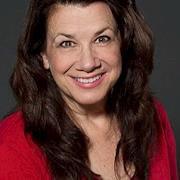