Hisonni Johnson is a Writer, Director, Actor, Cinematographer, and Creator. Academically, Hisonni started his accomplishments early by earning a full academic scholarship to the prestigious University School of Milwaukee, a nationally renowned college preparatory private school. Still a pre-teen, Hisonni won scholarships to numerous accelerated learning programs held during the summer by Northwestern University, UW Eau Claire, Marquette University and Beloit College. During which, Hisonni took courses in French, Japanese, Computer animation, biodiversity and finally, filmmaking. He further distinguished himself academically by receiving the several gold Presidential Seals for academics, signed personally by President George Bush and later Bill Clinton.
Artistically, Hisonni’s childhood was spent studying photography under the watchful eye of his adopted father, acclaimed master photographer David VanderVeen. Before Hisonni was old enough to shave he could, prep photo equipment, identify and understand lenses, rig lighting safely/securely and mingle with clients from McDonald’s, Sears, Nun Bush and GK like a pro. Once David noticed Hisonni’s knack for photography, he recommended that Hisonni spend plenty of time on stage and in front of the camera to understand how the talent felt. So, at age 16 Hisonni signed as a print model with Stewart Talent Chicago and worked consistently with photographer Dennis Manarchy, Marriott, John Deer, and Walgreens. On stage, Hisonni participated in at least one production a year through his church’s youth group.
Athletically, Hisonni excelled at artistic gymnastics and weightlifting. As a junior gymnast, Hisonni won multiple state championships, regional championships and qualified for the Junior Olympic Nationals five times. In the deadlift, Hisonni earned all-American honors by lifting 580 pounds at a body weight of 173 pounds. The same year, Hisonni won another Presidential Seal (gold) for fitness. As a prep football player, Hisonni was a team captain and earn all-conference honors. As a Track and field athlete, Hisonni earned all-conference honors and qualified to state his senior year in the shot put and triple jump events.
The miraculous thing about these accomplishments is that they happened while living in the notorious Milwaukee zip code, 53206. A ZIP code where black men are incarcerated at the highest percentage in America, up to 62%. In Milwaukee, a city well known as the country’s most segregated city. Milwaukee, Wisconsin a city named USA Today and Forbes Magazine as “The worst place in America to grow up black.”
After accepting a football scholarship to Concordia University, Hisonni shocked everyone by enlisting in the Marine Corps reserves and shipped out to boot camp two days after his High School Graduation. After boot camp, Hisonni completed a successful freshman campaign on the football field and finished the year with a 3.5 GPA before transferring to The University of Chicago Illinois on a full gymnastics scholarship. It was at UIC that Hisonni would suffer the neck injury that ended his athletic career and time as a Marine. Hisonni received an honorable discharged at the rank of Private First Class.
During this rough patch, Hisonni decided it was time to, listen to his dad and follow his instincts as an artist. Hisonni used his substantial body of work on stage to earn a spot in the inaugural Bachelor of Fine Arts program at the University of Wisconsin, Milwaukee. It was during this time that Hisonni would use his skills as a model and actors as a means to save money and eventually buy all the tools he needed to make films through a production company that HE owned. Suddenly the credits began to stack up. August Wilson plays, one-act plays, staged readings. Hisonni knocked out national commercials for Verizon, Boeing, and Mcdonalds. Hisonni booked TV programs like Attack of the show, X Play, Mind of Mencia, Law and Order, Fox’s Glee and ABC Family’s Greek. Until finally, enough checks were rolling in to make HIS films.
Hisonni has received over 100 accolades for his two original television pilots, “Fight Night Legacy" and "Olympia," including a 2013 Streamy Award Nomination, an official selection at Cannes, the
Grand Prize at the LAWEBFEST and a runner-up award at Marseille web fest. His most recent short
Grand Prize at the LAWEBFEST and a runner-up award at Marseille web fest. His most recent short films, “Grayson: Earth One”, The Gambit and 2018’s RedHood: It, have received great reviews from the likes of Marvels’ Stan Lee, The Hollywood Reporter, Blood Disgusting, Deadline Hollywood, The Collider, IGN, Nerdist and countless others whilst earning over $12,000 in crowdfunded support. Hisonni’s Feature directorial debut “Chalk It Up,” currently sits on Netflix as the highest rated gymnastic film on the platform and can be found on iTunes, Amazon or Hulu as well as on in-flight Entertainment. The 2018 indie feature film “Prodigy” Produced and shot by Hisonni Johnson is currently trending on Netflix and has been called one of the best Sci-fi films on Netflix by Collider Magazine. In October 2018 Hisonni wrapped principal photography on his Sophomore directorial effort entitled Take Out Girl starring Glee’s Dijon Talton and Youtube Hip Hop music sensation Hedy Wong. 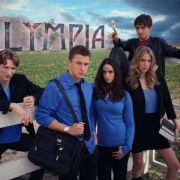 Posters from both of my pilots "Olympia" and "Fight Night Legacy"