Wesley here—charismatic and gregarious Assistant Director, 2nd, and Key PA. And just as delightful on set as I am in email

Been working in New York production for 5+ years after years of being a ginger in Hawaii working on productions in the sun. Mostly involved in the AD team now, added on as a 2nd and 1st AD for many productions, high end to low budgets and in between, as well as recently being a 2nd on the feature film "Blind" with Alec Baldwin and Demi Moore, and the 2nd on a new kid tv series named “Natalie Frye: Private Eye.” I handle many different scenarios.
Normally 2nd AD on promos, commercials, live events and occasional music videos; I’ve worked on such shows as Younger, Empire, The Americans, Sex Drugs & Rock n Roll, Louie, MTV promos with a mix of celebrities. And a lengthy list of commercials from brand names to professional sport promos to man on the street interview to live event recording, working with clients for approvals and production for scheduling. I’m the Family sized Halloween assorted candy bag of production; with me, you get the right candy that suits the situation

From Hugh Jackman to the Cookie Monster, I’ve handled it all on a range of productions, covering pre, on set, and post production—scheduling, coordinating, pre-pro business, invoicing, paperwork, PR, locations, vendors, pick ups, transpo, and other office tasks

Production has had me on a range of talent; from seasoned actors to fresh new faces both in film and television, 65+ BG out in public locations, well known musicians with multiple wardrobe changes, high end clients for real life interviews, professional athletes, child actors, “man on the street” talent, live stream events with on the spot released people, animals of all sizes, kinds and experience.

Consistently brought in to 2nd 2nd, background handle, and coordinate on productions with 60+ talent to wrangle, prepare and keep up with work documentation etc.

I can send references from commercial producers, ADs or directors if needed. I can assure you that my work shows how very capable I am in terms of crew management, paperwork (both sag and non sag plus Coogan account etc), and general production delegation. I'm more than capable and gladly desire to wear many hats, take on heavy responsibility, and delegate within different departments, as well as across companies from production to client.

What can I say, I’m a delightful and humorous ginger from Hawaii with a heart of gold, and I always have gum. 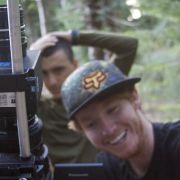 Camera in the Woods