RECORDING ARTIST:
Recording artistry of high-energy syncopated, to soothing, soulful rhythmic musical compositions and smooth vocals designed to move the listener to a plane of motivation
and tranquility. 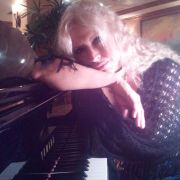