Andrea Lodovichetti was born in Fano (Italy) in 1976.
Graduated as a Film Director at the Centro
Sperimentale di Cinematografia – National School of
Cinema in Rome, since 2005 he has been working as
Assistant Director for Paolo Sorrentino (“L’amico di
famiglia” -a.k.a. “The family friend”- and Cannes 2008
winner “Il Divo” – a.k.a. “The Celebrity”).
Andrea wrote and directed several shorts and won a
consistent number of international awards. He has
also founded his own production house, Lobecafilm,
in partnership with Luca Caprara.

In 2009 he won the Italian Golden Globe for Best
Short Movie with his “Sotto il mio giardino” – a.k.a
“Under my Garden”, his graduation project. Among
the other recognitions he received, also the “Looking
for Genius” prize (Babelgum Film Festival, Cannes
2008) chaired by Spike Lee.

Andrea’s works have received over 80 prizes and
awards and have been screened in about 150 festivals and events, organized in Argentina,
Australia, Bulgaria, Canada, China, Czech Republic, Estonia, France, Germany, Greece,
Hungary, India, Ireland, Japan, Kenya, Macedonia, Morocco, Poland, Portugal, Russia, Scotland,
Serbia, Spain, United Kingdom, Ukraine, United States.
He is indeed the Italian short movie director who has been awarded the most in the history of the
country.

Andrea teaches directing and creative writing in workshops and Cinema schools. He was also
invited in several occasions to participate as a guest in panels and conferences, where he was
asked to talk about his projects and share his thoughts and knowledge on film making in general.

Listed in the 2008 and 2009 editions of the “Youngblood yearbook”, dedicated to young Italian
talents, in 2010 Andrea was selected as one of the 200 most outstanding talents of the country to
participate to “Tnt-Talents”, a great event that took place in the capital, dedicated to all of those who
distinguished themselves at an international level in the fields of art, sport and research.

A NOTE FROM ANDREA
Don’t be cheap on your dreams.
Always trust in who you are, as nothing else matters.
I was born in Fano, a small town located in the center of Italy by the seashore. Imagine me as a
child in my tiny, cozy room. Eyeglasses, untied shoelaces, a red pencil book in my hand. It’s a
beautiful day, but I don’t want to go out. Instead, I prefer to sit before a strange device my father
has just brought home. It’s a “VCR”. All I want is to stay there and watch movies.
I am paralyzed by my own emotions. I can’t help but wondering how people manage to create
such fantastic scenes, a storm of shots and actions. I am daydreaming. I can understand the power
and the magic behind the world of cinema, the opportunity that it can give; to tell one story, two
stories, a thousand stories all together.
Since that day I have spent my life thinking as a director, imagining how to make people dream.
I am glad to say that I have come a long way since then, since when I was just a boy who
messed around with his father’s VHS tapes, stealing them in secret to watch his favorite movies
again and again.
It was films like “Once Upon a Time in America” by Sergio Leone that changed my life forever. I shall
thank the Italian directors of the past for opening that door for me and for showing me the aesthetic,
ideological, historical and above human values that should be behind all films.
I don’t want to be cheap on my dreams. That’s why I hold on to my passion for story telling with
the same innocence I had when I was a child, the child with the red pencil-book. 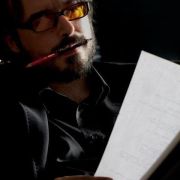