Jared Hassan Foles is a NYC music producer who owns and operates a two level professional studio and marketing company in Brooklyn, NY, known as World Eater Recordings. The studio, and Jared as it main composer/instrumentalist has provided compositions & recordings, event booking, audio & video production, marketing & advertising, graphic design, sound design, Foley/ADR, overdubs professional consultations, and lightning guitar playing for musicians, artists, bands, venues, films, museums and the uncommon-common man for 20 years. He has a wide and deep range of experiences and skills born from a lifetime of performance, production, and business management, gaining a depth of knowledge that is sought by people and organizations across the spectrum. From his composition, mixing & sound design work with multimedia artists Aisha Bell and Nari Ward, mixing/mastering for two Black Rock Coalition compilations, to his event management responsibilities for venues such as Brooklyn's Sputnik, the legendary CBGB, festivals such as the Brooklyn New Music Festival, Jared & World Eater Recordings has been been part of some of the hottest independent music & art events in NYC over the last 10 years.

For 7 of those years, he was also co-founder/writer and guitarist of the band Shrine for the Black Madonna, who released a double album in 2007. In 2008, Jared joined Kwame Bryant Pierce's 3 Bean Stew for the 2008 release of "Tales of the TIn Man", and provided rhythm guitar live with Dry Yai at NYC's Joe's Pub.

In 2009, Jared also became a nationally certified Photovoltaic engineer (NABCEP) through his study of electrical engineering and solar panels through the CUNY's Center for Sustainable Energy, and started, Brooklyn Solar Power, a PV design, installation and advocacy group. 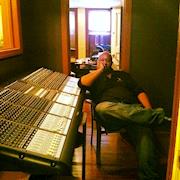 A look into a few of the places and events my work has been a part of. You can find more pics and videos of my work on Instagram on the following profiles: @worldeaternyc @jaredhassanfoles