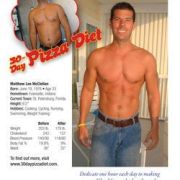 My name is Matt McClellan, better know as the Pizza Industry Spokesman or creator of the 30 Day Pizza Diet. Similar to Jared Fogle of Subway fame, I have dedicated my career to changing the image of pizza from a junk food to a health food. I have created an invention that allows every pizzeria the opportunity to offer the 30 Day Pizza Diet to inspire their customers and families to get healthy one slice at a time. The Ultimate Pizza Tour would be a reality show where I travel around the country in search of America's best pizza and educate a nation on how to eat pizza responsibly. I would love the opportunity to pitch my idea! Below is the "History of the Pizza Diet. I know it is alot of information but I have the credibility and ability to deliver an amazing and compelling television show! Thank you for your time, Matt McClellan HISTORY OF THE PIZZA DIET WEIGHT-LOSS: In July, 2009, McClellan created a 30 Day Pizza Diet in which he lost 24 lbs in 30 days, lowered his cholesterol 86 points, lost 10% Body Fat, and lowered his Blood Pressure to 118/80. He ate one slice every three hours and changed the nutritional value of each slice to obtain a balanced diet. McClellan also exercised one hour per day, and used one component of a Triathlon to get healthy. (Swimming, Cycling, Running) BEFORE: http://www.tampabay.com/features/fitness/article1018990.ece AFTER: http://www.tampabay.com/features/fitness/life-of-pie-losing-weight-by-eating-nothing-but-pizza/1029472 ENDURANCE FUEL: In June, 2010, McClellan created TOUR DE PIZZA 2010, a 1,300mile, 22 city, bike ride from Florida to New York City, to deliver his message that pizza is NOT a junk food. Upon the completion of the Tour De Pizza 2010, McClellan became the face of the Pizza Industry, and has committed his career to “changing the image of pizza worldwide from a junk food to a health food”. Tour De Pizza 2010: http://articles.nydailynews.com/2010-07-06/entertainment/27069142_1_pizza-diet-tomato-sauce-and-crust-free-slices Hosted World's Largest Pizza Party: http://pmq.com/news/news.php?id=14226 PERFORMANCE/ BODY TRANSFORMATION: In November, 2011, McClellan created the PIZZA90X, A 90 Day Body Transformation program in which he built 25lbs of lean muscle with a perceived “fast food”. His goal is to become the FIRST restaurant in history to promote building lean muscle with a fast food. Upon completion of the 90 Day Body Building program McClellan competed in the NYC Pizza Marathon, a 26.2 mile coarse that began at Grimaldi’s Pizzeria in Brooklyn and concluded in Times Square. NYC Pizza Marathon: http://pizzaradio.com/2011/11/09/ask-the-experts-with-matt-mcclellan/ WHAT'S NEXT? Can a healthy and fit man consume only pizza for 30 Days to compete in a Body Building Competition? Pizza'UDE 30 DAY PIZZA ONLY CHALLENGE: On September 1, 2012 McClellan will accept Pizza'UDE's 30 Day Pizza Diet Challenge. Unlike the 2009, Weight-loss 30 Day Pizza Diet, McClellan plans to prepare for his FIRST Body Building Competition. As I visualize this exciting challenge, I also know that a weight loss program would be very difficult as I weigh the same as I did upon the completion of the original pizza diet. (81kg) This will be the most difficult event I have attempted thus far because I am currently in the best physical condition of my entire life. Concerns: My beginning weight and physical condition are equal to my final results from the original 30 Day Pizza Diet. In 2009, I shocked the world with my drastic weight-loss but believe it will be unlikely for me to lose another 11kg on this new challenge. I want everyone to know this is an experiment and just like 2009, there are no guarantees for results. It is possible that I have no change at the completion of the 30 days or WE COULD CHANGE THE WORLD TOGETHER IN 30 DAYS.......it is as exciting as scary but I am READY TO START! Benefits: There are many sports that require athletes to "cut" weight to make a specific weight class. (MMA, Body Building, Boxing, Wrestling etc) Until now, the most common practice is to eliminate carbohydrates and sodium to become as lean as possible. During this 4 week cutting cycle the athletes become very weak, tired, and are not able to train as intense as before. I believe I can achieve the same results, keep my energy levels high, and change the way athletes prepare for future competition. If this challenge is successful, the 30 Day Pizza Diet could be the greatest diet program of all time. All the "fad" diets before photos are the same: Hair is long and uncut, Face and Body is unshaven. They expand their stomach to appear heavier. (never flexing) They avoid the sun to appear pale or white as possible. (The darker the skin the more lean you appear in photos) They never smile in the before photo. My "BEFORE" photo will look like EVERY ONES AFTER PHOTO! This will make it impossible to cheat!!!!!!! Why the pizza diet? Matt believes that if we teach adults how to make better decisions when the eat out, inspire them to exercise, they can in turn educate their children how to live a healthy lifestyle. Matt supports America's First lady Michelle Obama’s "Let's Move" campaign to fight Childhood Obesity, and is dedicated to educating people how to enjoy their favorite food for a lifetime. http://www.letsmove.gov/ Additional Info about Matt McClellan: Public Speaker/Motivational Speaker http://pmq.com/tt2/videos/id_305/title_PMQ-Pizza-Cruise-2010/ Marched in Macy's Thankgiving Day Parade http://www.courierpress.com/news/2010/nov/24/reitz-grad-to-parade-pizza-diet/?print=1 US PIZZA TEAM MEMBER - HEALTH & FITNESS COACH http://pmq.com/digital/201010/34.html Hope to hear from you soon, Thanks again, Matt McClellan Pizza Industry Spokesman tourdepizza@gmail.com