Joseph Seif is a San Francisco and Los Angeles-based director of photography and photographer. With over 16 years of commercial cinematography and photography experience, he has lensed advertising and promotional campaigns for the likes of Levi's, Mercedes-Benz, Microsoft, Visa, Airbnb, Google, Sting, Metallica and many other high-profile clients. His images have appeared in Fast Company, The Wall Street Journal, The Economist, and Forbes, having photographed the likes of Sir Richard Branson, Sean Penn, and Condoleezza Rice. In addition, Joseph is known for his ongoing underwater series. He began photographing and filming dancers underwater in 2011, and his body of work has since grown to include athletes, actors, and a professional mermaid.

While attending the Global Cinematography Institute in Los Angeles, Joseph studied under legendary directors of photography Vilmos Zsigmond, ASC and Yuri Neyman, ASC. His narrative and television credits include Ground Control, A Day, Henry Miller: Prophet of Desire (TV documentary), The Auditor, Lost Love, and Rebel in Rising. His second feature film, Tellers, was theatrically released in June 2019 via Blue Means Pregnant Films, and several of the short films he has photographed have been featured on the international festival circuit. His recent advertising cinematography work for the Natural History Museum of Los Angeles County has won two Silver Awards at the 2020 American Advertising Awards, and his collaborations with Zeda Films have won multiple international awards such as "Best Short Film" at the Hollywood Film Competition and "Best Story" at the London Fashion Film Festival.

Joseph's fine art photography book ONWARD was recently published via Truly Books. A collection of personal images taken over the course of 12 years, the book documents his growth as a visual artist- providing a glimpse into the photographic journey that has taken him all over the world and ultimately led to his cinematography career in San Francisco, Hollywood and beyond. Joseph’s services include creative direction, cinematography for advertising and long-form narrative projects, commercial and fine art photography, live streaming projects, and piano-centric film scoring. He is available for international and domestic projects. 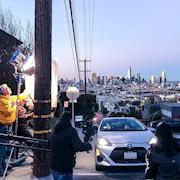 Joseph was amazing to work with. He is very professional and personable. I look forward to working him again in the future and will continue to keep an eye out for his next videos because his vision is second to none.

I have worked with Joe on multiple high profile video and still photography projects and am always inspired by his passion, vision and commitment to collaboration. He is a gifted photographer with a unique eye. Joe is a pleasure to do business with and a pleasure to be around. I recommend him whole heartedly.
-Jennifer Suttlemyre, Senior Video Producer

Joseph has vision and plays well with others; a great filed commander for video production.