Isaac is an award winning Cinematographer and Director specializing in documentary, commercial, and branded content. A few recent projects that Isaac has shot on are HBO's "Allen v. Farrow", Rakuten's "Seve: Artist Fighter Legend", Raw TV's "The Lost Sons", BBC's "Fever Pitch: The Rise of the Premier League" and many others. Isaac is an owner/operator of an Arri Alexa Mini, DJI Ronin 2, Sony FS7, Sony A7S II, Easy Rig Vario-5 as well as a full Mac-based editing studio. He has shot and directed for such clients as Netflix, NBC, MTV, HBO, Marriot, Discovery, ESPN, Jameson, Telemundo, Toyota, NFLPA and more. Isaac is a partner at one of Miami’s biggest production companies, CSP Media Group, and can offer full production services from 3/5 ton grip/lighting trucks, crew, production insurance, catering, and location services.

DJI RONIN 2 OPERATOR - Isaac has extensive training and experience operating the Ronin 2 stabilizer as well as the Movi Stabilizers on commercial, documentary, and narrative projects.

Isaac was born and raised in Harrisburg, Pennsylvania and graduated with his MFA in Film from the University of Miami in 2017.

As a filmmaker working from Miami he's won numerous awards at international film festivals around the world including Best Doc at the Miami International Film Festival Cinemaslam competition and Best Film at the Miami 48 Hour Film Competition 2018. His most recent film "Endure the Suck" about two disabled military veterans who go out sailing together won the Toyota Audience Award for Short Films at this years Miami Film Festival. His commercials and branded content have aired on national TV and across all platforms.

Isaac brings a vision to all of his clients that mixes his advanced technical skills with a unique, creative vision. 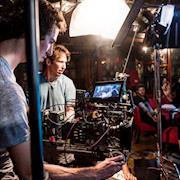 Behind the scenes on Isaac Mead-Long Productions

Cinematographer – Fever Pitch: The Rise of the Premier League

Director of Photography – The Lost Sons

Director of Photography – The Ballad of Botham Jean

Cinematographer – Into the Lioness Den with Amanda Nunes

Gaffer – Ted Williams: The Greatest Hitter that Ever Lived

Camera Operator – Gladesmen- The Last of the Sawgrass Cowboys

Cinematographer – DNA Around the World

Director, Writer, Editor – Give Me Trouble