I am going to try to attempt three things... 1) To make you laugh 2) Assure you that I am an intelligent, consummate professional and 3) Try to convey my unique brand.

I would love the opportunity to work with you guys! And it’s okay to say it out loud: 'I would love to hire this Brandon guy! See how it just rolls off the tip of your tongue? For the past 20 years I've produced, directed, shot and edited travel shows, realities, commercials, industrial's, training, web, surgeries and films both domestic and foreign... meaning I know pressure and work well under it. I also have twenty kids and they all wanna eat. Their fate rests upon your shoulders. And only you have the key to their salvation. Would you say no to a child? Help me help them and let's stop their hunger... and world domination and terrorism and people who wear plaid and think it's cool, but if you wear plaid, it looks really great on you. (I also have super powers). So come on. Let's join forces and save the world one project at a time. And everybody knows that really hot girls dig superheroes who save the world. Or maybe it's because women know that super heroes wear tights, and that if they wear tights... they must really be in touch with their feminine side. I am afraid of men who wear tights, but I'd love to do a film about it. Not really, but that's beside the point. The point is about this project and the joining of forces. So let's all do this and be superheroes with a big'ol fan base. Hope to hear from ya soon".

Hopefully the above made you laugh. It's often hard to stand out amongst the throngs of other applicants so thank you for indulging me while I shameless try to stand out. I am college educated, clock like reliable and beaming with confidence and positivity. I possess a thorough understanding of composition and multiple stylistic formats of shooting (Branding, Commercial, Docuseries/Follow, Episodic, ENG Run & Gun, Verite, Broadcast, Interview, Corporate, Conference, Film, Sports, Event, Surgical, Lab, etc). Included in my bag of tricks are directing talent, camera ops and crew, multiple lighting configurations and mood setups, audio setups, blocking, scripting writing and set dressing. You also don't have to worry about whether or not I'll show up. If I book it, I'll be there "early on time".

I understand compelling narrative and story arcs - Stasis/Trigger/The Quest/Surprise/Critical/Choice/Climax/Reversal/Resolution. So I can turn into a story shoot'n beast and film an entire scene, single camera, while simultaneously getting cutaways and all while NOT interrupting the scene. Proper coverage for an editor in TV/film land. Or if I'm charged with gathering snippets and vignette Broll for inter viewings I'm conducting, I have heat-seeking, laser focused optics to that would bring a tear to a general's eye. Or if it's filming branding content for a marketing/advertising agency, I can see the big picture, final product and rain-man zero in on highly stylized crisp content.

I am a solid, engaging and artistic DP who understands that content is organic, it grows and thrives in the creative environment. And being a polished editor with 4 editing bays, I firmly believe that editors make better directors of photography, and vice versa. So getting SyFy Supernatural on you... [cue creepy cool music] I'm the perfect hybrid. In my world this is not just a job for me, but rather a passionate career where I plan on spending the rest of my working life.

I am excellent under pressure - like Gordon Ramsay kitchen pressure, world traveled, well spoken and ridiculously easy to get along with. And because I've done so much traveling both domestic and foreign, it's afforded me many opportunities to come across many different types of personalities and characters. And being a life long and intuitive student of psychology and deep thinking/reflecting, I have learned to build genuine trust, diffuse negativity, and promote high spirited camaraderie. Humor is key (and a little self-deprecation). And at the end of the day, we're all trying to make our way in this world the best way we can. I'm here to help you win.

For added bonus, I've just come off first season of a new show for Fox called 2nd Chance Saves Lives and 2nd Chance Radio where I was the Director and DP. 2nd Chance Saves Lives is talk show about giving those who don’t have a voice and have lost everything a second chance in life. This was laden with in home interviews and a studio set. 2nd Chance Radio was a 5-panel studio show with one featured guest and was a little more loose. This was filmed in Texas and was a 4-camera shoot. I am now editing the first season. I can send example of show if interested, I just haven’t had time to put them on my reel.


Okay, cheers and have a great day! 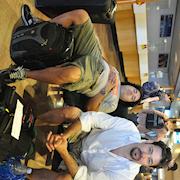 Director of Photography – Audi and VR

Director of Photography – This Is Fredericksburg

Director of Photography/Editor – Christmas Parade and Construction of Float

Director of Photograph – AND 1 Basketball

Director of Photography – Medicine For The People

Director of Photography – IN SEARCH OF TOMORROW

Director of Photography/Editor – Medicine For The People Spring Equinox

Camera Operator – To The Rescue

DP – Who's Who - Roselia Labbe

Camera Operator – To Catch A Killer - OWN