Paolina has been represented by T.H.E. Artist Agency, she has worked at CNN full time for 7 years covering some political events like the Town Halls like "Guns in America" 2016 with Former President Barack Obama moderated by Anderson Cooper, Military Town Hall at Fort Lee 2017 with Former President Barack Obama once again, she has traveled to Miami to work the Republican Debate in 2016 and has been a part of the 2017 Presidential Inauguration. She is know to work well under pressure, reliable, professional with great set etiquette. She is experienced with all skin tones, color correction, tattoo coverage & airbrush makeup application. A positive & friendly attitude comes free of charge. 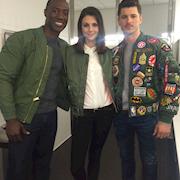