Seasoned director, executive producer, producer, writer, marketer, cinematographer, and editor. I have complete knowledge of the entire filmmaking process. Have taken films from script to theatrical release. Personal relationships at high level companies in Hollywood. Have had films I have made become official selections at festivals such as Tribeca Film Festival, Sitges, and San San Sebastian film festivals. I have worked directly with the head of Al Gore's network (Dave Newman) formerly known as Current TV to produce documentary segments for broadcast. I have created promotional artwork for multiple successful project and am proficient in Final Cut Pro, Pro Tools, Photoshop, Pre- Production, Principle Photography, Post Production, and sound mixing. I understand budgets and how to get projects done on time and on or under budget. Grown social media profiles to over 500,000 fans in short spans of time. I offer my vast knowledge of the business that has been gathered over a 20 year period in Los Angeles.

Trivia about Matt
Was taught the editing craft by Robert Brown who was the editor of famous movies such as Lethal Weapon, Police Academy, Lost Boys, and Amityville Horror.
Was deputized by the Police Athletics League for his work in Meth Abuse Prevention.
Was unable to accept a title role in the TNT series Witchblade due to a conflict of scheduling while screen testing for the role of Anakin Skywalker in Star Wars for George Lucas. 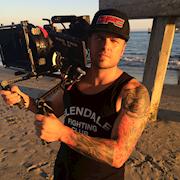 Shots of Matt Farnsworth working on various projects he has produced.