Since then, he has gone on to become a multi-award winning Los Angeles-based film director and producer. His work has been recognized by the world’s press, including The Hollywood Reporter, The Times of India, Film Courage and FilmInk Australia. Kicklighter recently served as a panelist at the 2018 Oscar-qualifying Hollyshorts Film Festival, taught several filmmaking courses as an educator on Stage32.com, and his interview series with the popular YouTube channel Film Courage has nearly 200,000 views.

On June 1st, 2021, Shout! Studios released The Sound of Identity, winner of the 2020 OUTShine Film Festival's Programmers Award for Excellence. Avaliable in the United States and Canada on Starz, AppleTV, Google Play, Vudu, FandangoNow and other platforms, in the spotlight of global media coverage, Lucia Lucas, the first transgender woman to perform as Don Giovanni in a professional opera, makes her historic debut in one of the reddest states in America.

In 2022, Kicklighter will release THE AMERICAN QUESTION. Following numerous subjects since December 2016, The American Question examines the root of American polarization and the repercussions of eroded civic institutions, public trust and leadership - revealing pathways forward to solve the problem. Guided by an all-star lineup of experts, including Amy Chua (Day of Empire), Colin Woodard (American Nations), Yuval Levin (The Fractured Republic) and Yascha Mounk (The People vs. Democracy), we examine the broader arc of history and discover new revelations about the shared values system that binds society together in times of triumph and turmoil.

Kicklighter is developing several films with a southern voice for producers Richard Saperstein (The Mist, Se7en), M. Elizabeth Hughes (Short Term 12, Girlfriend’s Day) and Beau Turpin (Beneath the Leaves, Counterpunch), including The Perpetual State of Georgia from Casey Nelson and Kate Murdoch (The Last Treasure Hunt) and Erk, a biopic about legendary college football coach Erk Russell. His screenplay Escaping Bellview, was featured on The Black List, SpecScout, and slated. Additionally, it was named to the Top 50 in the 2016 ISA Fast Track Fellowship.

James serves on the Advisory Board for the Department of Communication Arts at Georgia Southern University, his alma mater. He was recently chosen out of over 30,000 living graduates to be listed on the inaugural “40 Under 40 Alumni.” He was selected for “impact in business, leadership, community, educational and/or philanthropic endeavors.”

He resides in Los Angeles, California and still can't believe he gets to work across the country and around the globe. 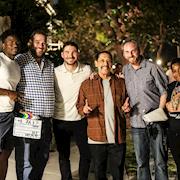 Behind the Scenes with James Kicklighter