Cathy Vlahogiannis has been recognized by the National Academy of Arts and Sciences with three Emmy® Awards and 17 nominations.

Cathy began her broadcasting career in radio marketing and promotions in 1999, first at WKIE-FM (92KissFM), then at WKQX-FM (Q101). She then spent three years co-hosting and producing the daily, nationally syndicated radio talk show, 'Mancow's Morning Madhouse', on Q101. Cathy joined Mancow once again on WLUP-FM (97.9 The Loop) from 2015-2018 as his co-host, producer and traffic reporter. It was during her time at 97.9 The Loop that Cathy had the opportunity to be seen on screen, most notably in Director Eli Roth's modern-day reimagining of the 1974 classic film, 'Death Wish'.

Recently, Cathy made the transition into film/television production. She assisted the Creator/Showrunner and Executive Producers/Writers of NBC's 'Chicago Fire'. She also worked as Production Assistant on all the Chicago-based Dick Wolf shows ('Chicago Fire', 'Chicago P.D.', and 'Chicago Med').

Currently, Cathy is a Set Decoration Buyer. She has worked on several productions, including NBC's 'Chicago Fire', and the Twentieth Century Fox pilot, 'Ordinary Joe'.

Cathy is a union member of both SAG-AFTRA and IATSE Studio Mechanics Local 476. She is a graduate of Columbia College Chicago, where she majored in television broadcasting, and she studied film at Chicago Filmmakers and The Second City.

A native Chicagoan, and a first-generation Greek-American, Cathy is also fluent in the Greek language.

Portfolio can be found at:
www.cathyv.com

Resume can be downloaded here:
bit.ly/CathyVlahogiannisResume 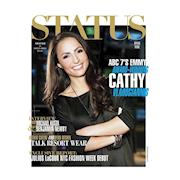 Self (Actor, Credited as 'Cathy the Greek') – 'Canal Street'