The Relationship between people gets more complicated and it becomes too hard to solve problems in the relationships, nobody wants to put an effort... So, the robots are made to become humans’ soulmates. They are patient, good listeners, they can feel, eat, and even give birth. They become more popular day by day, because they can adjust and become whoever the human partner wants. John denies this new reality. He is old school guy and he believes everything has to be the way it was: human should be a human and robots should make people’s life easier all other ways except the relationship part. He absolutely despises this new idea about the relationship between people and robots. We meet John in the story right after his hard break up with Lora. His friend Markus dates robots, he thinks it works, so he sets up a date for John to prove him that it works and to save his friend to be alone on his birthday. He gets hysterical about all that, but makes an emotional decision to go on that date to see what’s going to happen. Madison, a robot John supposed to meet, knows what he really things about robots, but she doesn’t get to choose who to spend time with, she feels worried to go on this date though. She gets confused by John’s behavior when they meet, because humans don’t usually get excited like that on the first date. John continuous acting weird in the restaurant. He doesn’t release Madison’s hand even at the table, which confuses Madison even more. She tries to start a conversation to defuse the situation, but they both realized they know pretty much everything about each other, so it doesn’t get any better. Suddenly, Markus appears in the restaurant. It looks like he’s there to wish his friend a happy birthday. They talk and Markus asks if John is going to sign the divorce papers, which John absolutely denies. Markus give a signal to Madison and leaves. Coming out of the restaurant, John wants to walk Madison back, it seems that she wants to cheer up John and talks about what happened, but she suddenly glitches as John’s session is expired and has to be extended with a payment. He gets furious about all this situation happening to him at once and walks away. But we hear Madison’s provider voice telling John that he must returns the object. He walks back to Madison and “activates” her, then Madison kills John right away, saying that he should have signed the divorce papers. Moments later the car stops by. We see Markus and Lora in the car. All three nod to each, Markus and Lora drive away. 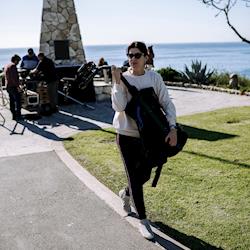 Assistant Director – Only a Mother Can Love

Assistant Director – Down to Ride

Writer/ Director/ Producer – The Opposite