A 30 year veteran sound mixer in film, TV, Docs and music. My work cross border from Niagara Falls Ontario and cover to Pittsburgh PA, Erie PA. Buffalo, and Eastern Ohio. I was previously primarily based in Pittsburgh PA where I still maintain Broadcast Lane Studios Pittsburgh.
Recently Credits include Docs :Tiger King, Won't you be my neighbor, the Fred Rogers Documentary, Tree of
My regular hire work as a sound mixer for CBS , NBC, PBS NOVA, pbs Pittsburgh WQED, NLF Film, ESPN, Entertainment tonight, HGTV NET GEO episodes for the world according to Jeff Goldblum. I have recently mixed broadcast sound for the recent Trump and Bidden presidential election coverage in Ohio, PA, and wet Virginia , as well as many shoots for this morning America, the today show over the last several years
I regularly do commercial work for clients like Nike, Walmart USA, Console Energy,Rebok,CMU,UPMC Medical system, Highmark Medical system,XARELTO®,Nissan,The Pittsburgh Steelers.Samsung USA.
MY Film work as a mixer, second unit mixer, EPK sound mixer, Boom operator and utility sound op include Me Earl and the Dying Girl,Mind Hunter,Jack Reacher--Tom Cruise, The Fox Catcher,Concussion, Will Smith,Draft Day-Kevin Costner,A Beautiful Day in the Neighborhood, Tom Hanks.etc
I am new back to Canada in the Niagara Hamilton region looking for gigs
In the past I was the first monitor/ stage sound mixer for the Tragical Hip, and worked for Canadian bands as 5440, Junk House,Jeff Healy Band,Pure,Blackie and the Rodeo Kings,Stehpen Fearing, Daniel Lanois,Scott Merrit,The Bourbon Tabernacle Choir and many other Canadian Artists, I am a former partner in Reaction sound studio which was one of Canada largest award winning recording studios though ou tthe 90's
My passion is music and film and any opportunity to tie both together is one I am down for! 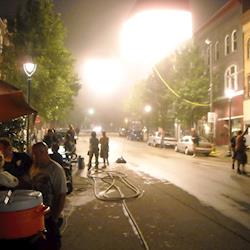 Sound Mixer – Won't you be my Neighbor - Fred Rogers Doc