I have worked on programs ranging from international/national Broadcast to corporate communications. Mixing/Boom. I am comfortable working in Studio as well as with remote audio. Travel is no problem. NASA clearance for security ( Space X, ULA: United Launch Alliance, Boeing, Lockheed Martin).

I have built up a strong network within the production community and remain involved in organizations such as FMPTA and Women in Film and Television. I served as the Executive Vice President of Orlando Chapter 2011/12: Florida Motion Picture Association. FMPTA.org. 2014-21 Board of Directors of Women in Film. Florida Chapter. An international organization 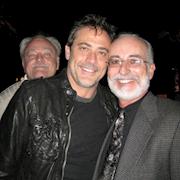 Rick walked into our doc shoot in Florida as a local hire and in 5 minutes felt we had worked together many times. Always great to work with seasoned pros.

Rick is a great person to work with. We send him to shoots without a doubt in our minds that he will deliver a great product. Thanks Rick!

I worked with Rick on multiple EA SPORTS projects. The results are crystal clear and he is total pro. I would not hesitate to recommend him for any type of project.

I have worked with Rick Alexander on several projects - he did audio work for me on several DVDs and CDs. I first met him when I was doing Pledge Drives at WMFE in Orlando, the PBS affiliate. We hit it off because we had a similar sense of humor. Rick was also one of my producers on my celebrity interview radio show, "The Linnda Durre' Show." He is a man who is dependable, easy to work with, and who thinks out of the box. He comes up with clever, creative suggestions and solutions. He knows how to network. He has a commitment to excellence and goes the extra mile. I highly recommend Rick Alexander.
--Linnda Durre', Ph.D.
Director, Producer, Award Winning Filmmaker
407-739-8620
Linnda.Durre@gmail.com